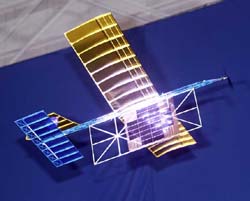 With a laser beam centered on its panel of photovoltaic cells, the lightweight model plane makes the first flight of an aircraft powered by a laser beam inside a building at NASA’s Marshall Space Flight Center in Huntsville Ala. (Tom Tschida, NASA’s Dryden Flight Research Center) <br> <br>

Ever since the dawn of powered flight, it has been necessary for all aircraft to carry onboard fuel — whether in the form of batteries, fuel, solar cells, or even a human “engine” — in order to stay aloft.

But a team of researchers from NASA’s Marshall Space Flight Center in Huntsville, Ala., NASA’s Dryden Flight Research Center at Edwards, Calif., and the University of Alabama in Huntsville is trying to change that.

They have now chalked up a major accomplishment… and a “first.” The team has developed and demonstrated a small-scale aircraft that flies solely by means of propulsive power delivered by an invisible, ground-based laser. The laser tracks the aircraft in flight, directing its energy beam at specially designed photovoltaic cells carried onboard to power the plane’s propeller.

“The craft could keep flying as long as the energy source, in this case the laser beam, is uninterrupted,” said Robert Burdine, Marshall’s laser project manager for the test. “This is the first time that we know of that a plane has been powered only by the energy of laser light. It really is a groundbreaking development for aviation.”

“We feel this really was a tremendous success for the project,” added David Bushman, project manager for beamed power at Dryden. “We are always trying to develop new technologies that will enable new capabilities in flight, and we think this is a step in the right direction.”

The plane, with its five-foot wingspan, weighs only 11 ounces and is constructed from balsa wood, carbon fiber tubing and is covered with Mylar film, a cellophane-like material. Designed and built at Dryden, the aircraft is a one-of-a-kind, radio-controlled model airplane. A special panel of photovoltaic cells, selected and tested by team participants at the University of Alabama in Huntsville, is designed to efficiently convert the energy from the laser wavelength into electricity to power a small electric motor that spins the propeller.

The lightweight, low-speed plane was flown indoors at Marshall to prevent wind and weather from affecting the test flights. After the craft was released from a launching platform inside the building, the laser beam was aimed at the airplane panels, causing the propeller to spin and propel the craft around the building, lap after lap. When the laser beam was turned off, the airplane glided to a landing.

The team made a similar series of demonstration flights in 2002 at Dryden, using a theatrical searchlight as a power source. The recent flights at Marshall are the first known demonstration of an aircraft flying totally powered by a ground-based laser. The demonstration is a key step toward the capability to beam power to a plane aloft. Without the need for onboard fuel or batteries, such a plane could carry scientific or communication equipment, for instance, and stay in flight indefinitely. The concept offers potential commercial value to the remote sensing and telecommunications industries, according to Bushman.

“A telecommunications company could put transponders on an airplane and fly it over a city,” Bushman said. “The aircraft could be used for everything from relaying cell phone calls to cable television or Internet connections.”

Laser power beaming is a promising technology for future development of aircraft design and operations. The concept supports NASA’s mission-critical goals for the development of revolutionary aerospace technologies.

Editor’s note: A NASA TV VideoFile on this subject will be broadcast beginning at 12 noon EDT October 9, 2003. NASA TV is available on the AMC-9C transponder, C-Band, located at 85 degrees west longitude. The frequency is 3880.0 MHz. Polarization is vertical and audio is monaural at 6.80 MHz.

All news from this category: Transportation and Logistics