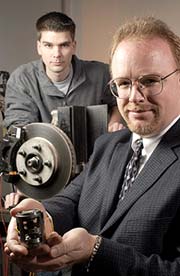 Squealing brakes cost auto manufacturers several hundred million dollars a year in warranty repairs and are among consumers’ top 20 vehicle complaints – even in luxury cars. Now, acoustics researchers at the Georgia Institute of Technology have developed a solution that could stop the problem of noisy brakes once and for all.

In disc brakes, squeal can occur when the brake pads contact the rotor while the vehicle is moving at low speeds, setting up a vibration that manifests itself as an annoying high-pitched squeal. The noise doesn’t affect brake operation, but the problem – which occurs in cars, trucks and buses – leads to needless replacement of brake pads and the addition of shims, damping materials and other parts designed to stop the noise.

“A squealing brake still works, and from an engineering perspective, there is no safety problem when the brakes are squealing,” said Kenneth Cunefare, an acoustics researcher in Georgia Tech’s School of Mechanical Engineering. “But it’s a perceived problem with the quality of the vehicle. If you’ve bought a new luxury car, you don’t want the brakes to squeal. So manufacturers must spend money on warranty repairs that shouldn’t be necessary.”

Automotive engineers have learned many tricks for designing quiet braking systems, but despite their best efforts, squeal still appears unpredictably. Designers have proposed feedback control systems that would detect the noise and then generate out-of-phase vibrations to counter the specific frequency of the squeal. Because of the complexity and cost, such systems haven’t been implemented.

By contrast, the Georgia Tech system would use a simple piezoceramic actuator mounted inside the brake piston to apply bursts of a “dithering” frequency to the backing plate of the inside brake pad, suppressing the vibrations that cause squeal. This active control would work despite temperature and humidity changes – and normal brake system wear – all of which can change the squeal frequency.

The system would be connected to vehicle brake light switches, turned on whenever the brakes were applied.

“Compared to feedback control, our dither system would be much simpler,” Cunefare said. “It would be an open loop control system in which we won’t need to detect the presence of squeal. All we would need to know is that the brakes have been applied.”

Without the need for detectors or logic systems to determine the proper control frequency, the Georgia Tech system could be much simpler, with fewer components. The piezoceramic stacks that Cunefare is now testing cost $130 each today, but he estimates high-volume production should reduce that to around $30 each – and perhaps even to a few dollars each. A single frequency generator and power electronics system could serve a vehicle’s entire braking system, though an actuator would be required for each brake piston.

In extensive laboratory testing using a dynamometer and acoustic measuring equipment, the system has been able to control brake squeal under a variety of different conditions. Next, Cunefare and his collaborators would like to field-test the system under real vehicle operating conditions.

“In terms of understanding the design constraints, we are pretty far along with this,” he said. “We know the temperature changes we’ll have to survive, and we know the forces that we’ll have to generate.”

Long-term reliability of the system and its potential effects on braking efficiency are among the critical long-term questions that must be answered by field testing. The brake system would still stop the vehicle if the squeal control system malfunctioned because the actuator would be located inside the piston. So far, Cunefare’s testing shows minimal – or no – impact on brake performance.

“This is fundamentally a fail-safe technology,” he added. “If an actuator were to break, there would still be another load path to allow the piston to operate the brakes.”

While the system would probably be installed first on high-end automobiles, it could potentially be retrofitted to existing vehicles. “Our goal is to have a drop-in module that slips directly into the brake piston and connects to the vehicle wiring harness,” Cunefare said.

The same principle could also be applied to drum brakes, which are used in heavier vehicles such as trucks and buses, and on the rear wheels of many automobiles.

The piezoceramic stacks consist of several layers of piezoelectric materials that stretch or contract when electrical current passes through them. Such devices are already used in vehicles, reliably powering fuel injection systems. However, when used to control brake squeal, the actuators would add to demands on vehicle electrical systems.

The actuators would operate at frequencies of about 20 kilohertz (kHz), well above where brake squeal occurs – and above the range of human hearing. The system, Cunefare said, would not be affected by anti-lock braking systems (ABS) now used on many vehicles.

The research has been supported by the National Science Foundation, using dynamometers and other equipment provided by automotive manufacturers and suppliers, including the Ford Motor Company and General Motors. The results of the research were presented in late April at the Acoustical Society of America meeting and have been the subject of papers in several professional journals, including the Journal of Sound and Vibration. In May, a paper (2003-01-1617) was presented to the 2003 SAE NVH Conference in Traverse City, MI.