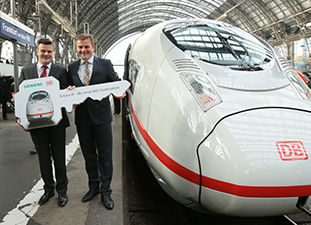 Jochen Eickholt, CEO of Siemens' Rail Systems Division, handed over the eighth and last of the new ICE 3 trains of the first consignment to Rüdiger Grube, Chairman and CEO of Deutsche Bahn AG, in Berlin on Wednesday. The handover took place in the presence of Germany's Transport Minister, Alexander Dobrindt.

The new trains have gone into operation on the Cologne-Frankfurt (Main)-Stuttgart route successively since the end of December 2013.

“This has enabled us to substantially reduce vehicle bottlenecks which have been occurring for years due to the tenfold increase in the frequency of axle tests which was introduced in 2009,” said Grube. “For our customers, this means more reliability and greater punctuality.”

“I'm pleased that the advanced ICE trains are now being put on the tracks. The new trains are strengthening the fleet of Deutsche Bahn and benefiting all rail travelers,” noted Dobrindt.

“We're very pleased that all the trains planned for domestic service have now arrived at Deutsche Bahn. We've thus reached an important milestone for the project,” said Eickholt.

The new ICE 3 offers a new level of quality when it comes to service and comfort. For example, passengers can keep informed about the train's progress on the new overhead monitors and dine comfortably in the 16-seat, fully equipped onboard restaurant while traveling through Germany at speeds of up to 300 kilometers an hour. In addition, the Series 407 scores high marks for lower energy consumption and enhanced technical reliability.

In particular, the most advanced ICE train offers numerous improvements for passengers with reduced mobility. The new vehicles are the DB's first long-distance trains to provide a lift for wheelchair users.

The wheelchair area is generously dimensioned, and both wheelchair spaces are equipped with a height-adjustable table and service call button. A tactile guidance system including floor strips and tactile seat numbers helps sight-impaired and blind passengers. In addition, grab poles are provided in longer aisle sections, aisle seats have grab handles, and the door steps and inner doors are designed with stronger visible contrasts.

The Series 407 is based on Siemens' Velaro platform. Like its predecessor, the new ICE 3 also has eight cars yet offers more seats: 444, including 111 in first class. Two trains can be coupled into a double unit with a seating capacity of 888. As will be available in all ICE trains by the end of May, the new ICE 3 also provides hotspots for mobile Internet access during travel. On the exterior, the new train differs from its forerunner in that it has a newly designed front end and a front-to-rear raised roof section for improved aerodynamics.

In December 2013, the new ICE 3 was approved for double-unit operation in Germany. Siemens is delivering a total of 17 new ICE 3 trains to DB. Having already handed over eight trains, Siemens has agreed with DB to conduct test runs in France and Belgium with an additional eight trains in order to pave the way for the official approval of cross-border operation to these countries.

Siemens AG (Berlin and Munich) is a global powerhouse in electronics and electrical engineering, operating in the fields of industry, energy and healthcare as well as providing infrastructure solutions, primarily for cities and metropolitan areas. For over 165 years, Siemens has stood for technological excellence, innovation, quality, reliability and internationality. The company is one of the world's largest providers of environmental technologies. Around 43 percent of its total revenue stems from green products and solutions. In fiscal 2013, which ended on September 30, 2013, revenue from continuing operations totaled €75.9 billion and income from continuing operations €4.2 billion. At the end of September 2013, Siemens had around 362,000 employees worldwide on the basis of continuing operations. Further information is available on the Internet at: http://www.siemens.com.

All news from this category: Transportation and Logistics