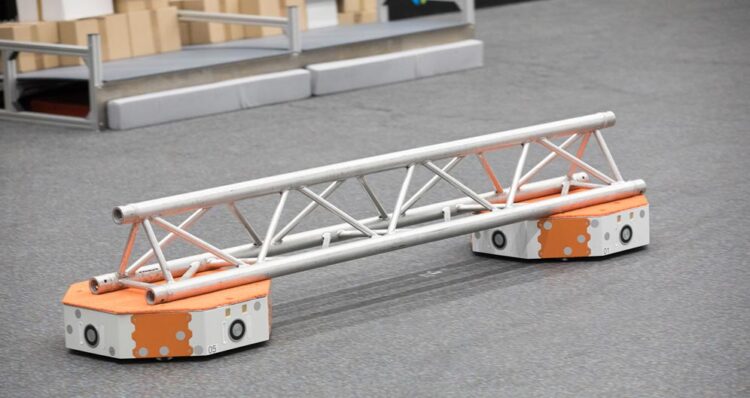 The Fraunhofer Institute for Material Flow and Logistics IML is developing a new generation of automated guided vehicles.
© Fraunhofer IML

The Fraunhofer Institute for Material Flow and Logistics IML is developing a new generation of automated guided vehicles. “LoadRunners” use artificial intelligence and communicate via 5G to organize themselves as a swarm and execute jobs independently. Able to sort large quantities of packages, this high-speed transporter can serve booming online and mail-order businesses well.

The coronavirus crisis has given Germany’s e-commerce a big boost. More and more consumers are shopping online to avoid the crowds in stores and minimize the risk of infection. A study conducted by the Bundesverband E-Commerce und Versandhandel Deutschland (BEHV), a German e-commerce association, found that people are ordering everyday consumer goods such as food and drugstore products online far more frequently than they did before the pandemic.

With help of the LoadRunner, logistics hubs can manage the rising volume of parcels. Developed by Fraunhofer IML in Dortmund, this unmanned vehicle can sort objects and transport them from A to B at speeds up to ten meters per second. “These vehicles can accelerate like a sports car and are pioneers for a whole new performance class,” says Prof. Dr. Dr. h. c. Michael ten Hompel, executive director of Fraunhofer IML. He adds that the LoadRunner is a “central piece in the mosaic of tomorrow’s logistics.”

The LoadRunner acts with its equals as a swarm. The LoadRunner system is based on a swarm of drones developed earlier by Fraunhofer IML researchers. Its 20 drones emulate the behavior of a flock of birds. Each drone takes its cues from its neighbors’ behavior, continuously adapting flight direction and speed to match other drones’ trajectory. This rules out collisions and enables drones to form groups. The reciprocal action of the drones’ individual decisions result in a swarm intelligence that does not require central coordination. The swarm system incorporates simulation-based artificial intelligence.

“The LoadRunner is equipped with an omnidirectional chassis; the direction of travel and direction of rotation are completely independent of one another. This means the new vehicle can turn in any direction without having to pause to maneuver,” Fraunhofer IML researcher Moritz Roidl explains how the system works. The robots have a ground camera on board to help with orientation. This camera generates 400 images per second of the floor surface. This way, the vehicle is able to determine its location very accurately even when traveling at high speeds in tight formations.

As a stand-alone vehicle, the LoadRunner is able to transport and sort parcels weighing up to 30 kilograms. This makes it the perfect luggage carrier for airports. These AI-driven go-carts can also work in concert as larger collectives to carry large, heavy and bulky objects. Every LoadRunner can also haul up to four passive trailers. Powered by four electric motors, the LoadRunner sharply brakes at just the right moment right in front of its destination and the payload slides from the robot onto the delivery platform.

Fraunhofer IML put the LoadRunner’s parcel-sorting powers to the test. The initial results were promising. About 60 vehicles can process 13,000 parcels per hour which is equivalent to the performance of conventional sorting systems. But this novel breed of vehicle has two great advantages over conventional sorting systems: it requires much less fixed infrastructure and can be put into operation far more quickly.

With artificial intelligence, the LoadRunner can take on and execute jobs independently – another reason why this vehicle is something of a revolution in logistics. Future LoadRunners are to communicate securely via 5G and independently transact pay-per-use contracts via blockchain.

Fraunhofer IML is busy developing this vehicle further. Researchers are now working on an outdoor version of the LoadRunner. “Thanks to its 5G capability, the vehicle can also be deployed outdoors. An outdoor LoadRunner based on the indoor Load-Runner’s technology could use this wireless link, for example, to shuttle between warehouses on company premises,” says Moritz Roidl.

Silicon Economy – the digital platform economy of the future

It will take open digital infrastructure such as the Silicon Economy to fully exploit the potential of LoadRunner technology. Silicon Economy is a digital platform economy for the future that will enable swarms of vehicles to organize themselves and communicate with humans, other swarms and platforms to accomplish their missions. Fraunhofer IML is pursuing a research project called Silicon Economy Logistics Ecosystem (SELE) to promote a decentralized, open alternative to the Silicon Valley and help this platform economy gain traction in Germany and Europe. The Federal Ministry of Transport and Digital Infrastructure (BMVI) is funding the project with a total of 25 million euros over three years. The partners in this project are Fraunhofer IML, the Fraunhofer Institute for Software and Systems Engineering ISST and TU Dortmund University. The LoadRunner is expected to play a central role in the Silicon Economy and usher a new era in logistics.