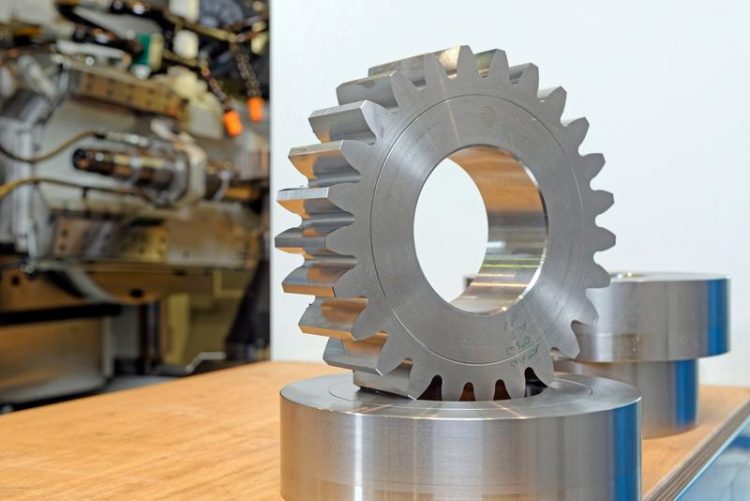 Fraunhofer employees have established an international network with experts from Sweden. © Werkzeugmaschinenlabor of the RWTH Aachen WZL, Peter Winandy

Many modern industrial enterprises operate across multiple locations in various countries. In many cases, all the company’s plants use the same machine types and identical production specifications – yet the quality of the products often varies from one facility to the next.

To tackle this issue, Fraunhofer experts are collaborating with Swedish research and industry partners to connect production facilities at different sites. The result is the “Swedish-German Testbed for Smart Production”, an initiative that will be used in the future to develop and test new technologies for fully networked manufacturing. The researchers’ goal is to optimize manufacturing and boost efficiency.

To test connectivity between multiple locations and countries, three testbeds are distributed over three different sites: Aachen, Chemnitz and Stockholm.

Other partners include the Fraunhofer Institute for Machine Tools and Forming Technology IWU in Chemnitz, the Powertrain Manufacturing for Heavy Vehicles Application Lab (PMH Application Lab) at the KTH Royal Institute of Technology in Stockholm, vehicle makers Scania and Volvo, and the Swedish telecom supplier Ericsson.

“This initiative brings together numerous partners from a range of industries. Together, we will be developing production environments for Industrie 4.0 and subjecting them to rigorous testing,” says Jannik Henser, managing director of the PMH Application Lab in Stockholm. “One of the key areas we are focusing on is the 5G mobile communications standard that, in the future, will link the production machinery to machine control systems.”

The first products currently being manufactured in a networked production environment at the Swedish testbed are gearbox components used in Scania and Volvo commercial vehicles. Researchers intend to use this initial example – which will also be on show at Hannover Messe – to showcase multiple different ways of improving conventional manufacturing.

One method they will be highlighting is the technique of processing metal parts in machine tools using “power skiving” to transform workpieces into high-tech gear parts. This technique uses a high-precision tool to shave metal off the workpiece.

“It requires a level of precision on the micrometer scale,” says Prof. Thomas Bergs from Fraunhofer IPT.

“Power skiving is a highly dynamic process. Any vibration during the manufacturing process – for instance due to tool wear – can cause damage within a fraction of a second. This damage is generally not spotted until the fully assembled transmission undergoes functional testing, so the resulting costs can be very high.”

One way to achieve faster intervention is to attach vibration sensors to the workpiece or the tool itself and to enable the sensors to send the information to the machine control via the 5G mobile network. “5G is so fast that the system can react within a matter of milliseconds. That means the latency – the time between the problem emerging and the machine responding – is short enough to prevent the damage from occurring,” says Bergs.

One of the biggest advantages of 5G is that it can transfer data without requiring cables, says Bergs: “A wired sensor is totally unfeasible when you are dealing with a part rotating in the machine at 1,000 revolutions per minute.” In future, however, the 5G standard will provide the option of self-adjusting, adaptive machining in quasi real time.

Right now, it is often a time-consuming process for customers to troubleshoot damage caused by a defective part, largely because it is so hard to identify the stage of the production chain in which the defect emerged.

But the concept of capturing all available data with sensors during production and storing it in the company’s own cloud paves the way for complete documentation of the entire manufacturing process. “It opens the door to continuously monitoring production parameters and recording the corresponding data. All that information is then stored in a digital part, a digital twin, which is available for analysis at any time,” says Jannik Henser.

Test environment available as a service

So how can industry customers benefit from this networked research community and testbed? For one thing, they can use it to develop technologies together with partners or even competitors without revealing too much of their proprietary information. In a sense, it provides the perfect setting to develop technologies on neutral turf.

“There is a very open and trusting atmosphere between us and our industrial customers. After all, we are not competing with them, but rather providing a link between manufacturing companies and IT enablers.

Our goal is to work together to improve production processes,” says Raphael Kiesel, Community Manager at the Aachen-based International Center for Networked Adaptive Production, or ICNAP (see box), which was launched recently as part of the High Performance Center.

“That format gives our customers the reassurance of knowing that their data is in safe hands.” A further advantage for industry partners is that they can access the test environment as a service. That reduces the need to invest in their own infrastructure and minimizes the uncertainty and risk associated with new technologies.

The networked test environments bring together many companies from a range of industries and offer partners an opportunity to learn from each other.

“A telecommunications company is not necessarily going to know what a metalworking company needs,” says Raphael Kiesel. “But here they learn to appreciate what other businesses need and get the chance to develop new solutions that would have been tough to achieve without this kind of cooperation.”

Kiesel argues that the collaboration is also more creative because of the combination of different mentalities in international partnerships. “The Swedes are very open to new technologies, especially in the field of communications,” adds Jannik Henser, who has spent many years living in Sweden.

“And the German partners introduce key benefits, too, such as their expertise in making machine tools. The resulting cooperation is far more than the sum of its parts.” This Swedish-German collaboration will be on show at a variety of Hannover Messe booths.

The Ericsson booth will be demonstrating how 5G technologies are being used for the German and Swedish testbeds. Meanwhile, the Swedish cooperation booth (Hall 2, Stand 61) will be showcasing exhibits from the transmission industry.

It will also incorporate a touchscreen connected to the Swedish-German Testbed via 5G to explain the intricacies of networked manufacturing. Meanwhile, the Aachen-based Fraunhofer institutes will be presenting further examples of networked manufacturing at their own stand (Hall 6, Booth A30), not just from the realm of machine tools, but even from life sciences and other industries. Fraunhofer IPT researchers will be giving some preliminary insights into this collaborative venture at the Hannover Messe Preview on January 24, 2019 in Hall 19.