ILA 2018: CFRP recycling: into the battery instead of the garbage 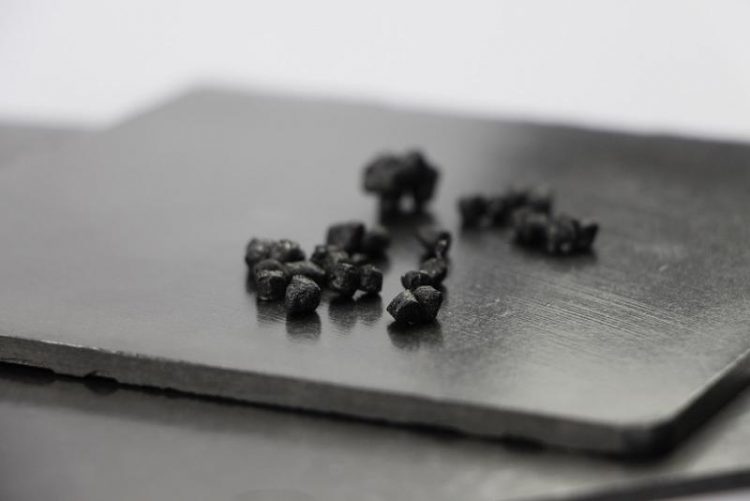 Modern wide-body aircrafts today consist of over 50 percent carbon fiber reinforced plastics (CFRP). The material is installed, for example, over a large area in the wings or fuselage. With carbon fibers embedded in a plastic matrix, the composite is lighter than previously used materials, while still being very stable. The decisive advantage for aviation: due to their lower weight, airplanes need less fuel.

“The manufacturing and processing of the CFRP is currently very time-consuming. The demand for sustainable recycling concepts is therefore steadily increasing,” observes Elisa Seiler, scientist at the Fraunhofer Institute for Chemical Technology ICT in Pfinztal, Germany. The amounts of CFRP recycling material are tremendous: for the Airbus 350, for example, they add up to over 65 tons. “In addition to this there are other relevant scrap quantities that already arise during production,” adds Seiler.

The Fraunhofer ICT has many years of experience in the development of technologies for fiber-reinforced plastics. At the ILA, the aviation and aerospace innovation trade fair, the scientists are presenting a concept that will be used to recover materials for batteries and fuel cells out of recycled carbon fibers. Together with partners, it has been possible to use recovered carbon fibers to produce a prototype of a bipolar plate – an electrode – on an industrial scale. The result is based on research from the “Graphit 2.0” and “RETRO” projects.

“Electric drives are now also a serious topic in the aviation industry. Manufacturers can directly perform value-preserving recycling by transferring materials from one application to the next,” says Seiler. The carbon fibers are electrically conductive and are suitable as a substitute for natural graphite, which also consists of carbon: a resource-critical raw material for the German economy that currently has to be imported from China at great expense.

Another advantage: recycled CFRP can be used for additive manufacturing processes such as 3D printing. “This is also a trending topic in the industry that makes production processes more efficient and saves costs,” says Seiler. After all, aircraft manufacturers also have to comply with the European Union (EU) requirements that have been in force since 2015: up to 85 percent of the average weight of a used vehicle has to be recycled. In addition: In Germany, the landfilling of CFRP is prohibited, and waste incineration plants can refuse to accept the material.

The CFRP experts have developed a special process with which carbon fibers can be recovered from the plastic matrix. To do so, they use microwave radiation to burn the plastic matrix that surrounds the fibers. So that the fibers do not burn up at temperatures of up to 900 degrees Celsius, the combustion has to be performed without oxygen.

“In technical jargon, this is called pyrolytic decomposition,” Seiler explains. The advantage of microwave radiation: energy efficiency – a whole oven no longer needs to be heated, just the component itself. The colleagues of the Polymer Engineering department at the Fraunhofer ICT embed the recovered fibers in thermoplastic material. This composite material has similar properties to graphite and is suitable for the production of bipolar plates. “Our prototype passed all the tests for conductivity, density and corrosion resistance perfectly,” reports Seiler.

“We’ve proven that it’s generally feasible to use recycled CFRP fibers to produce bipolar plates for batteries and fuel cells. This shows that recycling works in a holistic approach. This is particularly interesting for the aviation industry,” says Seiler in summarizing the added value of the research work. Both the recycled CFRP as well as the bipolar plates made from it can be seen at the ILA.

The next steps until early summer are the characterization of the bipolar plates in the battery cell network and studies concerning the life cycle assessment. “Then, we want to tune the technology so that we can manufacture bipolar plates from recycled CFRP in series – for example, with an aviation partner,” concludes Seiler.