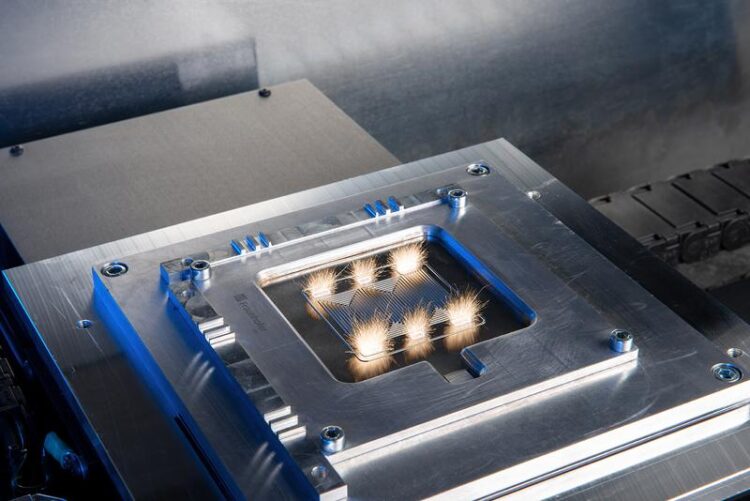 To create a sustainable road traffic system, hundreds of thousands of fuel cells will be needed for hydrogen-powered cars in the future. Until now, though, fuel cell production has been complex and too slow. The Fraunhofer team is therefore developing a continuous production line that will be able to process fuel cell components in cycles lasting just seconds. The pilot line is set to be presented at the Hannover Messe Digital Edition from April 12 to April 16, 2021.

Germany and Europe are on their way to a hydrogen future. The German federal government approved its hydrogen strategy in June of last year. The strategy aims to build electrolysis plants for hydrogen production with a total output of 10 gigawatt in Germany by the year 2040. And for Europe, the European Commission is proposing in its “Hydrogen Strategy” to expand electrolysis output by a further 40 gigawatt.

Hydrogen is set to be used in industry and in the future also in road traffic, finally heralding a shift away from petrol and diesel fuel. But the many millions of vehicles will need many millions of fuel cells to convert hydrogen into power. And as yet, Europe has no mass production facility that could cover this demand. What we lack most of all is a closed production chain for making fuel cell components and then assembling them to form the finished item, like on a assembly line production.

“We need non-stop production lines that are able to drop and process components in cycles lasting just seconds,” says Dr. Christoph Baum, Managing Director of the Fraunhofer Institute for Production Technology IPT in Aachen. “Industry in Europe is still quite a long way from that point.” Right now, various components are manufactured by various producers and then assembled to create the fuel cell. And the production steps such as forming, cleaning, coating or joining the fuel cell components are spatially separated from one another in various machine islands.

Christoph Baum: “All in all, the logistics within our production facilities are complex. Parts have to be picked up, placed and buffered multiple times – that’s a time-consuming business.” Therefore, Fraunhofer IPT is developing for the first time in a research environment a non-stop pilot line in which fuel cell components are made and assembled into the finished product in one place.

The heart of the fuel cell

Specifically, this is about producing the heart of the fuel cell, the “stack”, on which hydrogen is converted to water and the energy is collected. This stack consists of hundreds of bipolar plates arranged on top of one another. The bipolar plates are pulled through an intricate system of millimeter thick channels, the hydrogen being fed in at one end and the water produced by the chemical reaction in the stack being fed out at the other.

Producing these bipolar plates is a challenge in itself. The plates are only about a hundred micrometers thick and tend to resemble a film rather than a plate. They have to be moved very carefully to make sure nothing gets creased or worse still wrinkled. First, presses are used to emboss the channel structures onto the plate blanks. They are then coated under vacuum to reduce their electrical resistance and make them more corrosion-proof. A finished bipolar plate consists of a left half and a right half, with the fine channel system between. The two halves therefore need to be welded together with a high degree of precision. There are also various cleaning steps.

Presentation at the Hannover Messe

The team at Fraunhofer IPT has now developed a production line on which special pick-and-place handling devices, hand down all components and the bipolar plates in such a way as to create a fluent process. This pilot line will be presented during the Hannover Messe Digital Edition from April 12 to 16, 2021. In a live stream, Fraunhofer IPT, together with the Fraunhofer Institute for Material and Beam Technology IWS and the Fraunhofer Institute for Machine Tools and Forming Technology IWU, will present the Fraunhofer-Gesellschaft’s action plan and initial research results for the cost-effective, automated mass production of fuel cells. The aim of the three institutes, who are specialized in the field of manufacturing, is to accelerate the economic breakthrough of fuel cells and electrolysers both nationally and internationally. Moreover, they plan to transfer the action plan and the individual technologies for the production of fuel cells from research to industrial application.

Because some process steps are faster than others, the challenge is to optimize the flow as a whole so that neither jams nor waiting times occur. The blank pressing process, referred to as deep drawing, is done in just about one second, while the deposition of the protective layer takes much longer. “We are predicting that hundreds of thousands of bipolar plates will be needed for the hydrogen economy of the future,” says Christoph Baum. “For this reason, we are striving to achieve a throughput of at least one bipolar plate per second across all plants.”

From the roll to the finished item

In the CoBIP project (continuous roll-to-roll production of bipolar plates for fuel cells), Fraunhofer IPT is currently driving the automation of the pilot line together with the Fraunhofer Institute for Laser Technology ILT, the Jülich Research Center and several industrial partners. The researchers are developing a plant for processing the bipolar plates in a film strip off the roll, so-to-speak. The film strip passes through the machine and hence through all process steps – from the blank to the forming, the deposition of the protective coating to the cleaning through the joining process by the laser. Only at the very end are the bipolar plates cut off the strip and isolated. This continuous process from the roll to the finished item will save a number of handling steps. The plant is designed to be so flexible that industrial partners are able to exchange and test individual production modules at will. “We are providing manufacturers with a tool they can use to design and optimize a non-stop production line to suit their requirements.” A high cycle rate allows several devices to operate in parallel or to be connected in series, lasers for joining the plate halves, for example.

“It’s true that in Europe we have a good deal of system expertise for manufacturing high-grade fuel cells. But we lack the facilities to produce fuel cells on an industrial scale at competitive prices — production lines like we are already seeing at Hyundai or Toyota,” explains Christoph Baum summing up. Baum reminds us that when it comes to fuel cells, the hurdle of industrial production scaling should not be underestimated. Similar to the situation with batteries, transferring systems from the laboratory to mass production is a complex matter. This is where, in the past, our international competitors have built on their expertise in cost-effective mass production with greater determination. Thanks to high-efficiency production lines like the one Fraunhofer IPT is now presenting, we will be able to identify and address the challenges of industrial scale production at an early stage.