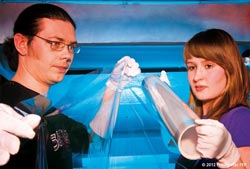 Rain, darkness, the dazzling lights of an oncoming car – strong light reflection in such situations can be irritating or even become dangerous. Effective anti-reflection is not only important for spectacles and windshields, but also provides optimal light incidence for solar cells, solar heating panels, and triple glazing.
The Fraunhofer Institute for Applied Optics and Precision Engineering IOF in Jena and the Fraunhofer Institute for Electron Beam and Plasma Technology FEP in Dresden have undertaken a joint project with industrial partners including Leica Microsystems, Rodenstock, and Southwall Europe. The project, entitled PolAR (reference 16/N0723), was funded by the Federal Ministry of Economics and Technology (BMWi) and aimed to develop a new, efficient, continuous roll-to-roll process for making large-area anti-reflecting polymer films.

The optimized plasma-etching process creates a structure on the polymer films, whose effect is based on the moth eye principle. The process enhances the base roughness of the polymer film and generates nanostructures, namely minute crests and troughs. As the nanostructures are smaller than the wavelength of visible light, they do not act as scattering centers and the film remains clear. At the same time, the structures cause the refractive index between the film and external medium to change continuously. That has the consequence that the optical reflection of, for example, PET film is reduced from 12% to 0.2%. Up until now this could only be achieved by complex coating of films with a four-layer anti-reflection system. The flexibility of, in particular, thin films is also adversely affected by the latter. Besides being useful for films, plasma-etching is also suitable for giving curved substrates anti-reflective properties.
Although the moth eye principle has been known for a long time, the Fraunhofer researchers have made a decisive technological breakthrough by generating nanostructures on large surfaces using a process that is suitable for mass production. In roll-to-roll pilot plants, like those used at the Fraunhofer FEP, kilometer-long films can be made anti-reflective at a rate of several meters per minute. Dual magnetron systems, which are usually used in industry for vacuum coating processes, provide an effective and stable ion current over several hours. Using these sources, the base process developed at the Fraunhofer IOF was transferred to high-area substrates at Fraunhofer FEP. The process has already been successfully used on PET films, triacetate cellulose (TAC) films, fluoropolymer films (ETFE), and lacquered films.

Interested parties can visit our booth (no. 904) at the SVC 2012 conference in Santa Clara (California / USA) from 1 May to 3 May to see the anti-reflective films.