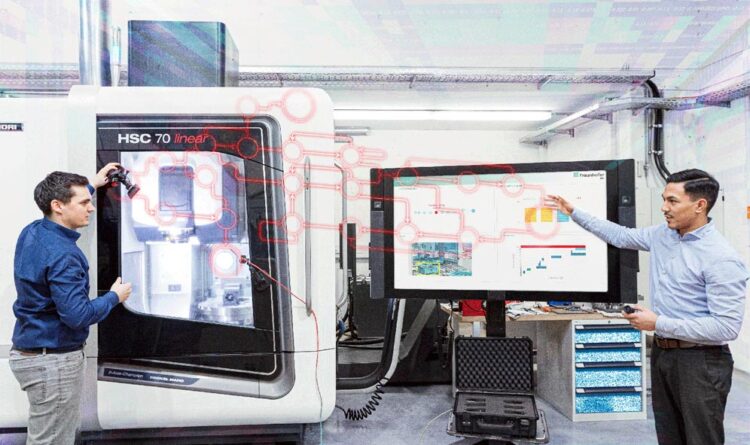 The equipment’s behavior model and efficiency level are visually represented on the monitor.
© Fraunhofer IPA

As connectivity increases in production processes, so does their complexity. Data analysis expertise is required for predicting equipment outages in good time and detecting what causes losses in efficiency. MOEE, the tool that research teams from the Fraunhofer Institute for Manufacturing Engineering and Automation IPA are exhibiting at the Hannover Messe trade fair from April 12 to 16, 2021, identifies the causes of production losses in connected equipment and makes it possible to quickly resolve disruptions.

Overall equipment effectiveness (OEE) is a vital metric in the production sector. It determines the percentage of quality products that equipment produces while operating at a given speed. At the same time, this figure represents a basis for improving the process through the identification of production losses. With MOEE, which stands for Maximize Overall Equipment Effectiveness, researchers at Fraunhofer IPA in Stuttgart have developed a software tool that detects production losses in complex, interconnected, automated equipment based on three parameters: performance, quality, and availability.

The algorithms implemented in the tool automatically analyze equipment behavior to create an individual process model. In the process, they display and evaluate the various process stages in a production cycle. “The algorithms work out what processes occur when and in what order, and how long each one lasts. If process stages don’t take place at the required speed and they are not attuned to each other in an optimal way, this reveals something about the performance,” says Brandon Sai, head of the “Autonomous production optimization” group at Fraunhofer IPA. He gives an example to illustrate how the software works: “When the robots pause briefly, this is usually not detected, so it’s hard to quantify the effects of these pauses. However, when many of these pauses add up, it leads to errors.” If the machines are stationary, this reveals something about availability, another criterion for insufficient equipment effectiveness. The self-learning algorithms developed internally at Fraunhofer also provide information on the quality level achieved. The goal is to match equipment components to the identified losses and thus detect the actual weak points.

A common cause of disruptions is calculating greater safety buffers than are needed. MOEE can detect fractional stoppage periods that are invisible to the naked eye as well as bottlenecks in dynamic systems—caused by production congestion. Malfunctions, such as a machine components getting jammed, or insufficient application of a lubrication layer are also recorded, as the software meticulously codes every state. “Through a combination of automatic process modeling and machine learning, we detect production losses as they arise, which helps to quickly resolve disruptions,” says the engineer. Rather than being burdened with this information, operators are only notified in the event of a problem. Alternatively, they can view the equipment’s efficiency level and behavior model via the display on the dashboard.

MOEE uses the control system’s I/O interface when conducting the analyses. “The I/O interface is the machine’s brain. The equipment is monitored directly from the control system. From there, the equipment behavior can be detected in an optimal, highly granular way,” says Sai. This makes it possible to determine production losses at the signal level, increase availability and performance, and identify variations in quality. Performance and quality losses can be traced right down to the level of equipment components—a single valve for example.

MOEE is already in use in production companies, and has proved itself many times over. Exhibit visitors can learn more about the software’s range of functions at this year’s Hannover Messe trade fair, from April 12 to 16, 2021.