Cebit 2012: The wireless bicycle brake, a prototype on an exciting mission 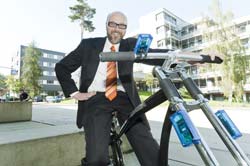 In view of that fact, computer scientists at Saarland University are designing mathematical calculations to check such systems automatically. The scientists will present their results at stand F34 in hall 26 at the computer fair Cebit. The trade show takes place in Hanover, Germany from March 6 to 10.

Professor Holger Hermanns, who holds the chair of Dependable Systems and Software, and who developed the wireless bicycle brake together with his group, explains: “Wireless networks are never a fail-safe method. That’s a fact that’s based on a technological background.” Nonetheless, the trend is to set up wireless systems that, like a simple bicycle brake, have to function all the time. “In the field of the future European Train Service, for example, concrete plans already exist,” Hermanns reports. Furthermore, he says that train and airplane experiments are far too sophisticated, and could even endanger the life of human beings in case of malfunction.

Therefore, the Saarland computer scientist’s mathematical methods should now verify the correct function and interaction of the components automatically. “The wireless bicycle brake gives us the necessary playground to optimize these methods for operation in much more complex systems,” Hermanns adds.

Therefore, his research group examines the brake prototype with algorithms that normally are used in control systems for aircraft or chemical factories. As a result, they found out that the brake works with 99.9999999999997 percent reliability. “This implies that out of a trillion braking attempts, we have three failures,” Hermanns explains and concludes: “That is not perfect, but acceptable.”

To brake with the wireless brake, a cyclist needs only clench the rubber grip on the right handle. The more tightly the grip is clenched, the harder the disk brake on the front wheel works. It seems as if a ghost hand is in play, but a combination of several electronic components enables the braking. Integrated in the rubber grip is a pressure sensor, which activates a sender if a specified pressure threshold is crossed. The sender is integrated in a blue plastic box which is the size of a cigarette packet and is attached to the handlebar.

To enhance reliability, there are additional senders attached to the bicycle. These repeatedly send the same signal.

Its current configuration enables the cruiser bike to brake within 250 milliseconds. This means that at a speed of 30 kilometers per hour, the cyclist has to react two meters before reaching the dangerous situation. But the Saarland University computer scientists are not satisfied with just this functionality. “It is not difficult to integrate an anti-lock braking system and traction control. That takes only a few adjustments,” Hermanns explains.

Professor Kurt Mehlhorn and Christoph Weidenbach of the Max-Planck-Institute for Informatics in Saarbrücken are involved in the project, too. In 2011, the Research Foundation Group approved about 8.7 million euro, and about 3.5 million inure to the benefit of the Saarland research work. Since 2004, the special research group has been sponsored with approximately 26 million euros, and 9.5 million went to the computer scientists at Saarland University.