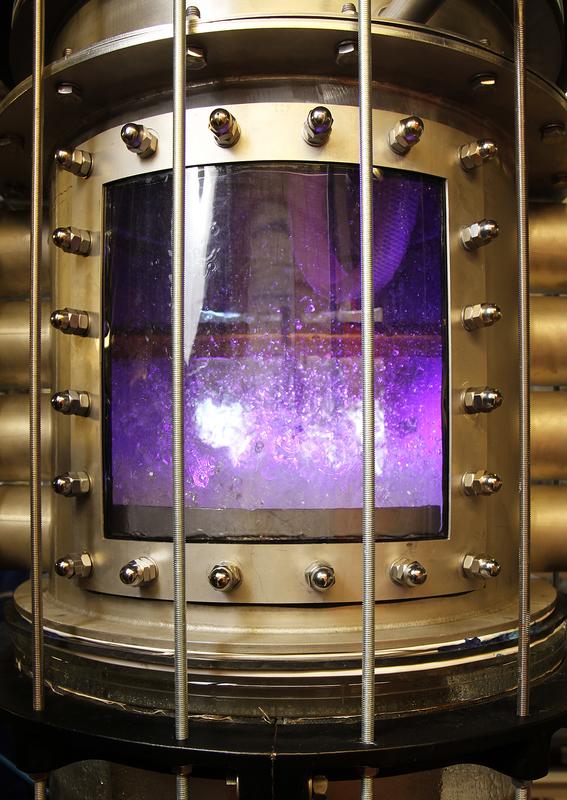 At Achema, the exhibition on process technology in Frankfurt, they will be presenting the technology at the research stand of the state of Rhineland-Palatinate (Hall 9.2, Stand A86a) from 11 to 15 June.

During distillation, liquids are evaporated and then separated into their constituents following the subsequent condensation of the vapour. A well-known example can be found in the refining of crude oil, where the crude oil is separated into high-boiling heavy oil, diesel and petroleum, as well as into lower-boiling kerosenes or gasolines.

“This common procedure involves a high amount of energy consumption,” says Jonas Schulz, who examines this procedure as part of his doctoral studies at the chair of separation science and technology under Professor Dr. Hans-Jörg Bart. In the United States alone, distillation is responsible for half of the energy costs associated with thermal separation processes in the chemical industry. This incurs costs in excess of USD 100 billion every year.

The engineers at the TUK are developing a technology that will improve energy efficiency in the future. Their approach is based on a camera system that monitors the process. “Distillation in the chemical industry takes place in what are known as ‘fractionating columns’,” explains Markus Lichti, who is also involved in the project. These columns are cylindrical installations that contain a series of distillation plates. These can be configured in a variety of ways, depending on the application, including plates with a sieve-like surface.

Separation occurs as part of a continuous process in which vapour is produced at the very beginning by adding the corresponding mixture into the middle of the column. It runs downwards through the individual plates and is heated in the lower section of the column. It then rises to the top as vapour. Mixture is regularly fed into the system to prevent the reaction from stopping.

“In turn, the vapour heats the liquid, which then begins to boil and rise as vapour,” adds Schultz, while explaining the principle. “It then cools again and collects in liquid form on the next highest plate.” As a result, the constituents of the liquid that have a lower boiling point evaporate again and move up to the next distillation plate in the column. This process continues over several levels, until the liquid with the lowest boiling point has accumulated on the highest plate.

“Contamination occasionally occurs during distillation, since the liquid does not separate properly into the individual components,” Lichti continues. This can be caused by a range of different factors, such as a distinctly increased vapour flow, excessive pressure or insufficient liquid in the system.

For instance, it is possible for the liquid and vapour to mix on the plate to such a degree that the vapour carries away some of the droplets from the liquid phase. Experts refer to this as entrainment. The droplets move up to the next plate where they remain; in the refining of crude oil, for example, some of the heavy oil can accumulate with the diesel, thereby changing its chemical properties.

The camera system developed by the researchers at Kaiserslautern may provide a solution to this in the future. The camera is integrated into a probe – a stainless-steel tube – which protects it against the hot vapour. The probe is inserted into the fractionating column through an access slot. This access slot resembles the principle of a drawer in which the probe is fixed in place. A glass plate allows the camera to look into the interior of the column.

High-contrast images are enabled by means of lighting technology housed in another access slot directly opposite. “Our system is designed in such a manner that these access slots can be positioned at different points of the fractionating column,” Schulz expounds. This enables the process to be examined from the edge or in the middle, for example. “Using the images, we can see how large the droplets are and how quickly they form,” the engineer continues.

“Our technology allows us to measure parameters that could not be observed before.” The camera is controlled by a software program that also analyses the images and thus detects entrainment. Until now, there have not been any investigations into how this process occurs precisely. The data obtained give the researchers insight, for instance, into whether the parameters have to be configured differently for the distillation process.

In the future, the industry could use the software as part of an automatic control system that initiates countermeasures whenever the measurements deviate, as well as to save heating energy and reduce operating costs. In addition, the technology can save material – for example, if it shows that certain distillation plates are not necessary or their surface is not sufficiently fine.

The Kaiserslautern researchers from the Faculty of Mechanical Engineering and Process Technology will present their system at the exhibition (Hall 9.2 Stand A86a). Their work forms part of the TERESA project (droplet formation and reduction in material exchange apparatus), funded by the Federal Ministry for Economic Affairs and Energy (BMWi).

The participation of the researchers of the TUK in the exhibition is being organised by Klaus Dosch from the Department for Technology and Innovation. He acts as contact partner for companies and also establishes contacts in science.
Contact: Klaus Dosch, email: dosch[at]rti.uni-kl.de, tel. (including during the exhibition): 0631 205-3001