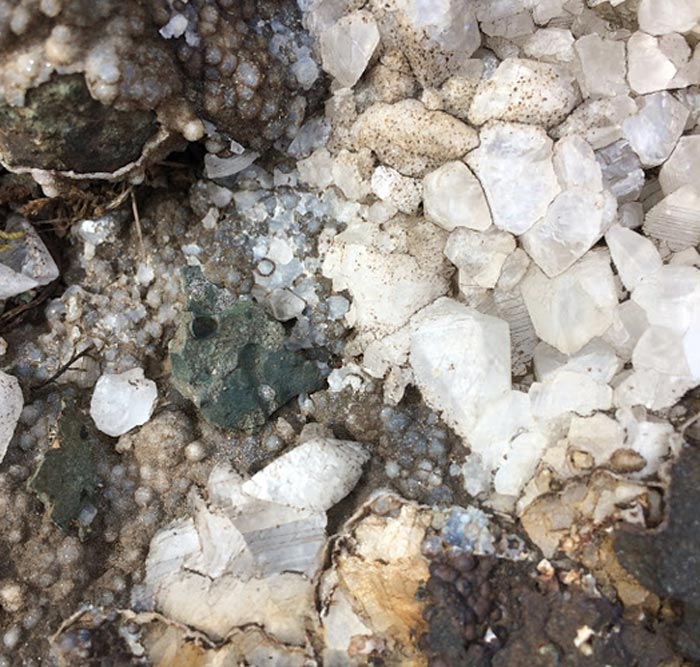 New finding could help inform how zeolites are used in carbon capture and storage.

Zeolites could be considered as nature’s workhorse.

Now, in the first study of its kind, Northwestern University researchers have analyzed ancient zeolite specimens collected from the edges of East Iceland to discover that zeolites separate calcium isotopes in a wholly unexpected way.

“Calcium occurs as multiple isotopes having different masses,” said Claire Nelson, the paper’s first author. “Most minerals preferentially incorporate lighter calcium isotopes. What we found is that some zeolites prefer lighter isotopes to an extreme degree, while other zeolites prefer heavier isotopes, a rare and striking result.”

This finding could help quantify temperatures in both modern and ancient geologic systems, as well as inform efforts to mitigate human-caused climate change by carbon capture sequestration.

The study was published on Friday (Oct. 1) in the journal Communications Earth and Environment, a new open access journal established by Nature Portfolio.

“We discovered something completely unexpected and new,” said Andrew Jacobson, senior author of the study. “It could have wide ranging implications in the geosciences and across fields, especially considering that zeolites have countless applications in industry, medicine and environmental remediation.”

Jacobson is a professor of Earth and planetary sciences at Northwestern’s Weinberg College of Arts and Sciences. Nelson recently earned her Ph.D. working in Jacobson’s laboratory and is currently a postdoctoral research scientist at Columbia University’s Lamont-Doherty Earth Observatory. Zeolite expert Tobias Weisenberger, a geologist at the University of Iceland’s Breiðdasvík Research Center, was a key co-author of the study.

Although they form in a wide variety of geologic environments, zeolites are particularly common in volcanic settings that produce basalt. As lava erupted from volcanoes piles up over time, the buried rocks compress and transform. Groundwater interacts with these rocks to form zeolites, which comprise aluminum, oxygen and silicon atoms linked together to make three-dimensional cage-like structures.

“The initial volcanic lava crystallized into primary minerals,” Nelson said. “Then water rained down and infiltrated the rocks, dissolved them and produced secondary minerals like zeolites and calcite.”

To collect samples for the study, Nelson visited the Berufjörður-Breiðdalur region in eastern Iceland, where glacial erosion has carved deep valleys and fjords into basalt rock to reveal buried zeolites. Nelson climbed to the top of the fjord’s mountains and rappelled into the river canyon to collect samples from various altitudes, representing different depths of burial and thus temperatures of metamorphism.

To analyze these samples, Nelson used a state-of-the-art, highly precise method for measuring calcium isotopes developed in Jacobson’s laboratory. Nelson and Jacobson were particularly interested in identifying mechanisms that fractionate (or separate) calcium isotopes according to their masses.

“For decades, geoscientists have employed zeolites to understand the hydrothermal alteration of basalt, but until now, calcium isotope researchers had neglected them,” Jacobson said. “As it turns out, the minerals show extremely large calcium isotope fractionations, much larger than anyone predicted or even thought possible.”

The Northwestern team found that the zeolites showed extreme calcium isotope variability, more so than practically all other materials produced at the Earth’s surface.

The results have wide-ranging implications, as zeolites have multiple industrial and commercial applications. In addition, understanding the mechanisms that fractionate calcium isotopes can help inform both existing and new uses of the calcium isotope proxy. Because isotope fractionation can be temperature-dependent, Jacobson and Nelson say that zeolites could be developed into a completely new type of geothermometer, potentially capable of reconstructing ancient temperatures in environments where zeolites form.

“The bond length relationship indicates that the fractionations are controlled by thermodynamics rather than kinetics,” Nelson said. “Thermodynamic, or equilibrium, controlled fractionation is temperature-dependent. So, with more research, the calcium isotope ratios of zeolites could be used to quantify temperatures from the past.”

The new understanding also has significance for using calcium isotopes to trace basalt weathering, including its role in long-term climate regulation and application in carbon capture and storage.