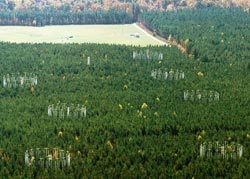 Upon microbial decomposition, carbon can be released again as CO2 into the atmosphere, but its residence time in the soils is largely unknown. In particular, the effect of warming on the decomposition of decade-old carbon, which makes up the majority of soil carbon stocks in temperate forest soils, is highly debated.

This question was addressed by an international study group, from the University of California, Irvine, CA, and Berkeley, CA, the Lawrence Berkeley National Laboratory, CA, and the Max Planck Institute for Biogeochemistry in Jena, Germany, using two independent approaches: In forest Free Air CO2 Enrichment (FACE) experiments in Wisconsin and in North Carolina, the local atmosphere was enriched with fossil-derived CO2 that has a markedly different 14C and 13C isotope signature from the background atmosphere.
That way the carbon fixed since the start of CO2 enrichment (more than 10 years ago) could be distinguished easily from carbon fixed afterward. The second approach used the history of radiocarbon (14C) in the atmosphere, which has declined since large-scale atmospheric weapons testing ended in the early 1960s, resulting in measurable differences in the 14C content of carbon fixed from one year to the next.

“Using these approaches, we first confirmed that about two-thirds of carbon stored in each soil was more than a decade old, consistent with other temperate and tropical estimates”, says Francesca M. Hopkins, lead author of the study and PhD student at the University of California, Irvine, USA.
To study how temperature affected the age structure of decomposing carbon, top soils from the two field sites were incubated at increasing temperatures. In the decomposition-derived CO2 flux, the proportion of decade-old carbon, distinguished based on its isotopic signature, did not change with warming. “Surprisingly, this suggests that temperature sensitivity of decade-old carbon is the same as that of the younger carbon” says Prof. Susan Trumbore, Max Planck Director in Jena and head of the international study group.

Since decade-old soil carbon represent a major portion of soil carbon stocks, its temperature sensitivity ultimately controls the magnitude of feedback between soil carbon and climate warming. “Our finding that decade-old carbon is vulnerable to warming suggests the potential for release of soil carbon to the atmosphere as CO2 as temperatures warm, which in turn would lead to more warming”, Trumbore points out. [EF]

Background Information:
The Max-Planck-Institute for Biogeochemistry, founded in 1997, is dedicated to the study of long-term interactions among the biosphere, atmosphere, geosphere and the oceans. The research aims of the Institute include:
– quantifying the role of these interactions in the control of the Earth’s climate in a time of increasing anthropogenic impact;
– developing a quantitative and predictive understanding of the regulation of processes in ecosystems and their attendant biogeochemical cycles in the face of climate change;

– and investigating feedback mechanisms at the Earth’s surface that involve vegetation, atmospheric composition and climate. For more information see www.bgc-jena.mpg.de.

http://www.bgc-jena.mpg.de
homepage of the institute