Home / Fachgebiete / Studies and Analyses / The melting of large icebergs is a key stage in the evolution of ice ages
22.02.2021 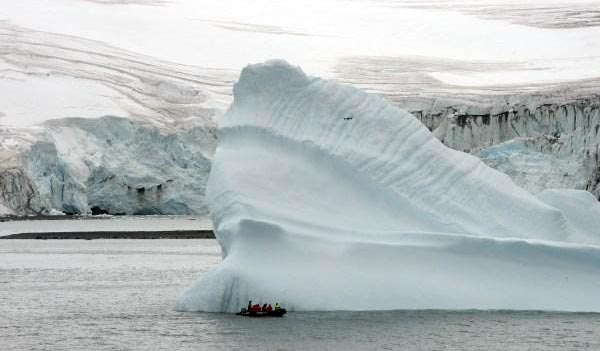 Sampling an iceberg during the Powell 2020 research expedition close to the "Juan Carlos I" Spanish Antarctic Base/José Abel Flores
Credit: University of Granada

A new study, in which the Andalusian Earth Sciences Institute (IACT) (CSIC-UGR) participated, has described for the first time a key stage in the beginning of the great glaciations and indicates that it can happen to our planet in the future. The findings were recently published in the scientific journal Nature

Antarctic iceberg melt could hold the key to the activation of a series of mechanisms that cause the Earth to suffer prolonged periods of global cooling, according to Francisco J. Jiménez-Espejo, a researcher at the Andalusian Earth Sciences Institute (CSIC-UGR), whose discoveries were recently published in the prestigious journal Nature.

It has long been known that changes in the Earth’s orbit, as it moves around the Sun, trigger the beginning or end of glacial periods by affecting the amount of solar radiation that reaches the planet’s surface. However, until now, the question of how small variations in the solar energy that reaches us can lead to such dramatic shifts in the planet’s climate has remained a mystery.

In this new study, a multinational group of researchers proposes that, when the Earth’s orbit around the sun is just right, the Antarctic icebergs begin to melt further and further away from the continent, moving huge volumes of freshwater from the Antarctic Ocean into the Atlantic.

This process causes the Antarctic Ocean to become increasingly salty, while the Atlantic Ocean becomes fresher, affecting overall ocean circulation patterns, drawing CO2 from the atmosphere and reducing the so-called greenhouse effect. These are the initial stages that mark the beginning of an ice age on the planet.

Within this study, the scientists used several techniques to reconstruct oceanic conditions in the past, including by identifying tiny fragments of rock that had broken away from Antarctic icebergs as they melted into the ocean. These deposits were obtained from marine sediment cores recovered by the International Ocean Discovery Program (IODP) during Expedition 361 off the sea-margins of South Africa. These sediment cores enabled the scientists to reconstruct the history of the icebergs that reached these latitudes in the last million and a half years, this being one of the most continuous records known.

The study describes how these rocky deposits appear to be consistently associated with variations in deep ocean circulation, which was reconstructed from chemical variations in minute deep-sea fossils known as foraminifera. The team also used new climate simulations to test the proposed hypotheses, finding that huge volumes of fresh water are carried northward by icebergs.

The first author of the article, PhD student Aidan Starr from the University of Cardiff, notes that the researchers are “surprised to have discovered that this teleconnection is present in each of the different ice ages of the last 1.6 million years. This indicates that the Antarctic Ocean plays a major role in the global climate, something that scientists have long sensed, but that we have now clearly demonstrated.”

Francisco J. Jiménez Espejo, a researcher with the IACT, participated in his capacity as a specialist in inorganic geochemistry and physical properties during the IODP 361 expedition aboard the JOIDES Resolution research vessel. For two months, between January and March 2016, the research team sailed between Mauritius and Cape Town, collecting deep-sea sediment cores.

Jiménez Espejo’s main contribution to the study focused on identifying the geochemical variations associated with glacial and interglacial periods, which has made it possible to estimate with greater accuracy the age of the sediment and its sensitivity to the different environmental changes associated with those periods.

Over the course of the last 3 million years, the Earth began to experience periodic glacial cooling. During the most recent episode, about 20,000 years ago, icebergs continuously reached the Atlantic coasts of the Iberian Peninsula from the Arctic. Currently, the Earth is in a warm interglacial period known as the Holocene.

However, the progressive increase in global temperature associated with CO2 emissions from industrial activities could affect the natural rhythm of glacial cycles. Ultimately, the Antarctic Ocean could become too warm for Antarctic icebergs to be able to carry freshwater north, and therefore a fundamental stage in the beginning of the ice ages–the variations in thermohaline circulation–would not take place.

Ian Hall, also of Cardiff University, who co-directed the scientific expedition, indicates that the results may contribute to understanding how the Earth’s climate may respond to anthropic changes. Similarly, Jiménez Espejo, notes that “last year, during an expedition aboard Hespérides, the Spanish Navy research vessel, we were able to observe the immense A-68 iceberg that had just broken into several pieces next to the islands of South Georgia. Ocean warming may cause the trajectories and the melt patterns of these large icebergs to alter in the future, affecting the currents and, therefore, our climate and the validity of the models that scientists use to predict it.”