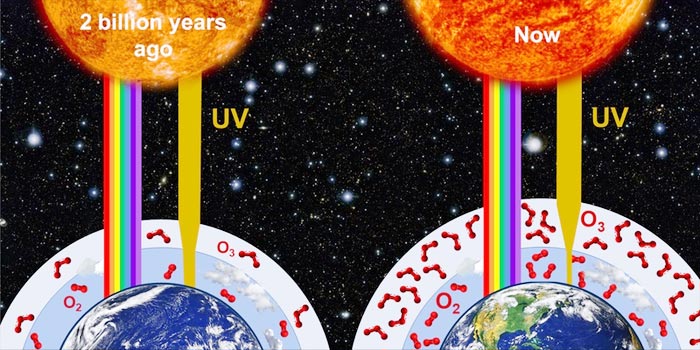 During long portions of the past 2.4 billion years, the Earth may have been more  inhospitable to life than scientists previously thought, according to new computer simulations.

Using a state-of-the-art climate model, researchers now believe the level of ultraviolet (UV) radiation reaching the Earth’s surface could have been underestimated, with UV levels being up to ten times higher.

UV radiation is emitted by the sun and can damage and destroy biologically important molecules such as proteins.

The last 2.4 billion years represents an important chapter in the development of the biosphere. Oxygen levels rose from almost zero to significant amounts in the atmosphere, with concentrations fluctuating but eventually reaching modern day concentrations approximately 400 million years ago.

During this time, more complex multicellular organisms and animals began to colonise land.

Gregory Cooke, a PhD researcher at the University of Leeds who led the study, said the findings raise new questions about the evolutionary impact of UV radiation as many forms of life are known to be negatively affected by intense doses of UV radiation.

He said: “We know that UV radiation can have disastrous effects if life is exposed to too much. For example, it can cause skin cancer in humans. Some organisms have effective defence mechanisms, and many can repair some of the damage UV radiation causes.

The research - A revised lower estimate of ozone columns during Earth’s oxygenated history - is published today (5/1/2022) in the scientific journal Royal Society Open Science (the paper will be available at https://doi.org/10.1098/rsos.211165 when the embargo lifts).

The amount of UV radiation reaching the Earth is limited by the ozone in the atmosphere, described by the researchers as “…one of the most important molecules for life” because of its role in absorbing UV radiation as it passes into the Earth’s atmosphere.

Ozone forms as a result of sunlight and chemical reactions – and its concentration is dependent on the level of oxygen in the atmosphere.

For the last 40 years, scientists have believed that the ozone layer was able to shield life from harmful UV radiation when the level of oxygen in the atmosphere reached about one percent relative to the present atmospheric level.

The new modelling challenges that assumption. It suggests the level of oxygen needed may have been much higher, perhaps 5% to 10% of present atmospheric levels.

As a result, there were periods when UV radiation levels at the Earth’s surface were much greater, and this could have been the case for most of the Earth’s history.

Mr Cooke said: “If our modelling is indicative of atmospheric scenarios during Earth’s oxygenated history, then for over a billion years the Earth could have been bathed in UV radiation that was much more intense than previously believed.

“This may have had fascinating consequences for life’s evolution. It is not precisely known when animals emerged, or what conditions they encountered in the oceans or on land. However, depending on oxygen concentrations, animals and plants could have faced much harsher conditions than today’s world. We hope that the full evolutionary impact of our results can be explored in the future.”

The results will also lead to new predictions for exoplanet atmospheres. Exoplanets are planets that orbit other stars. The presence of certain gases, including oxygen and ozone, may indicate the possibility of extra-terrestrial life, and the results of this study will aid in the scientific understanding of surface conditions on other worlds.

The study was funded by UK Science and Technology Facilities Council and involved collaboration with scientists at the National Centre for Atmospheric Research, Rutgers University, and the City University of New York, all of which are in the US.