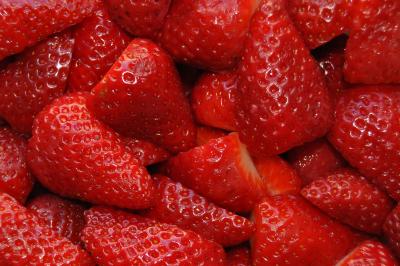 The consumption of strawberries lowered levels of bad cholesterol and triglycerides in an experiment with volunteers. Credit: SINC

At the end of this unusual treatment, their levels of bad cholesterol and triglycerides reduced significantly, according to the analyses conducted by Italian and Spanish scientists.

Several studies had already demonstrated the antioxidant capacity of strawberries, but now researchers from the Università Politecnica delle Marche (UNIVPM, Italy), together with colleagues from the Universities of Salamanca, Granada and Seville (Spain), conducted an analysis that revealed that these fruits also help to reduce cholesterol. The team set up an experiment in which they added 500 g of strawberries to the daily diets of 23 healthy volunteers over a month. They took blood samples before and after this period to compare data.

Eating strawberries also improved other parameters such as the general plasma lipid profile, antioxidant biomarkers (such as vitamin C or oxygen radical absorbance capacity), antihemolytic defences and platelet function. All parameters returned to their initial values 15 days after abandoning 'treatment' with strawberries.

As Maurizio Battino, researcher at UNIVPM and Director of the study, tells SINC: “This is the first time a study has been published that supports the protective role of the bioactive compounds in strawberries in tackling recognised markers and risk factors for cardiovascular diseases.”

The researcher admits that there is still no direct evidence about which compounds of this fruit are behind their beneficial effects, “but all the signs and epidemiological studies point towards anthocyanins, the vegetable pigments that afford them their red colour.”

The research team confirmed in other studies that eating strawberries also protects against ultraviolet radiation, reduces the damage that alcohol can have on the gastric mucosa, strengthens erythrocytes, or red blood cells, and improves the antioxidant capacity of the blood.

In fact, this year they will publish another study in the journal Food Chemistry in which they will demonstrate that consuming strawberries increases the antioxidant function of blood flow, erythrocytes and mononuclear cells.