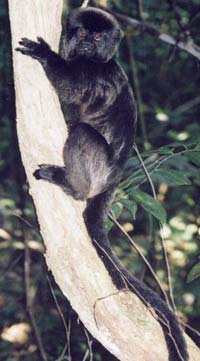 Sometimes it takes time to uncover nature’s secrets. Take the case of callimicos, also called Goeldi’s monkeys, a reclusive and diminutive South American primate. Discovered a century ago by Swiss naturalist Emil August Goeldi, the animals were once considered to be a possible “missing link” between small and large New World monkeys.

But new findings from the first long-term studies of the monkeys in the wild seem to indicate that this is not the case, although the animals have a unique set of anatomical, reproductive and behavioral characteristics.

Leila Porter, a biological anthropologist at the University of Washington, has spent nearly four years observing callimicos (Callimico goeldii) in the Amazon basin of Northern Bolivia. Her pioneering fieldwork has collected the first detailed data of the ecology and behavior of the animals, an endangered species, in the wild. Among other things, her observations show callimicos eat fungi during the dry season, making them the only tropical primate species to subsist on this food source for part of the year. They also have a different reproductive strategy from other small New World monkeys. Callimicos (Latin for beautiful little monkeys) have the capacity to give birth to a single offspring twice annually while their closest primate relatives – marmosets, tarmarins and lion tarmarins – give birth to twins once a year.

Porter’s findings have just been published in the journal Evolutionary Anthropology in a paper she authored with Paul Garber, a biological anthropologist from the University of Illinois at Urbana-Champaign.

“Callimicos have been mystery monkeys of South American because they are difficult to observe in the wild,” she said.

The animals are all black, unlike their marmoset and tamarin relatives who have bright and showy coloration or features. Callimicos are timid and live primarily below 10 meters in the understory of Amazonian rainforests in Bolivia, Brazil, Columbia, Peru and Ecuador. They weigh about one pound and are about nine inches tall with tails that extend another foot. Callimicos have big hands with claw-like nails and move about their habitat largely by leaping from one tree trunk to another or by walking on top of branches in a four-legged gait.

A number of carnivores, including small wild cats, snakes, tayras (a weasel-like mammal), eagles and other raptors, prey upon the shy primate. Callimicos are so timid that Porter only was able to observe them for a total of about one minute during her first three-month trip to Bolivia. However, more extended fieldwork enabled her to make more extensive observations.

“Five months seems to be the minimum time for a group that hasn’t been followed before it begins to accept watchers. Once they become habituated to humans, we (Porter, two assistants and a guide) can follow them all day by cutting a grid of trails in the forest,” she said.

In her fieldwork, Porter observed groups ranging in size from two to 11 individuals with six being the average. Normally there is only one breeding female in a group, although she did observe groups with two breeding females on several occasions. Groups engage in cooperative infant care, sharing food and carrying infants on their back.

Porter said fruit and, to a lesser degree, grasshoppers are callimicos’ primary foods. However, in the Amazonian dry season when fruit is scarce, the monkeys switch to fungi that live on bamboo and rotting wood as a dietary staple.

The animals have fairly large home ranges and are widely but patchily distributed in the western Amazon basin. However, no one knows exactly how many callimicos there are, she said.

Porter hopes to continue her research with another long-term study that would look at when offspring disperse from a group, reproductive strategies and infant care behavior. In addition, she wants to examine callimico gut anatomy to understand how they may have evolved to get nutrition from fungi and to do a comparison of callimico and marmoset anatomy.

Seeing better by looking away

A Food Chain in the Dark