Home / Studies and Analyses / The human brain and comparative judgments
25.03.2004

The human brain and comparative judgments 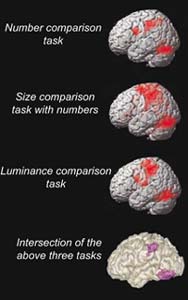 It is relatively common to hear an object described as being “bigger than a breadbox,” and most people have little trouble making this type of comparative judgment. However, how the human brain makes such comparisons based on continuous quantities is quite complex and not completely understood. Now, a new research study published in the March 25 issue of Neuron provides significant new information about how the brain interprets spatial and nonspatial sensory information to make comparative judgments about quantities such as number, size, and luminance.

Previous work suggests that a region of the brain called the intraparietal sulcus (IPS) is active during comparative operations. Dr. Philippe Pinel and colleagues from the Unit of Cognitive Neuroimaging in Orsay, France designed a study to investigate how the brain processes the information that is used to make comparative judgments about numerical information and nonnumerical stimuli like size and luminance. Specifically, the researchers were interested in determining whether comparative judgments on each continuum involve the activity of specific defined regions of the IPS. Human subjects were scanned using a sophisticated brain imaging technique called functional magnetic resonance imaging (fMRI) while they made comparative judgments about pairs of Arabic digits that varied in actual physical size, numerical size, and luminance. This experimental paradigm allowed the researchers to examine interference evoked by the other two irrelevant dimensions as well as specific regions of brain activity.

The authors observed that, during comparative judgments, the relative continuous quantities of number, size, and luminance are represented in distributed and overlapping regions of the cortex, with no single region uniquely selective for one particular stimulus. According to Dr. Pinel, “Our results demonstrate that, during comparative judgments, continuous dimensions such as luminance and size are neither processed by distinct regions of highly specialized cortex nor by a single generic comparison system. Instead, processing appears to be distributed along the length of the IPS, with partially different local peaks for each dimension. There is considerable overlap between the local brain regions, and although there may be some neurons that respond to stimuli from a single dimension, those neurons are not likely to exist in a unique, well-delimited anatomical area.”