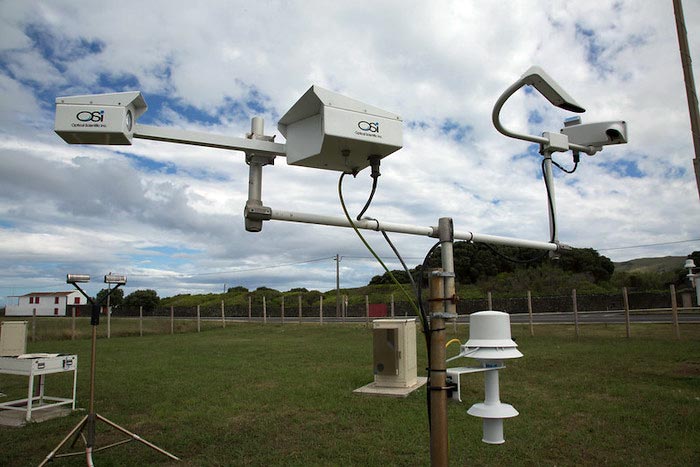 Instrumentation at the ARM facility in the Eastern North Atlantic on Graciosa Island off the coast of Portugal where a KU researcher will show how precipitation influences atmospheric aerosols.
Credit: U.S. Department of Energy Atmospheric Radiation Measurement (ARM) user facility.

Study will sharpen understanding of precipitation’s influence on aerosols in the atmosphere.

A new $620,000, three-year grant from the U.S. Department of Energy will enable a University of Kansas atmospheric scientist to research how aerosols, clouds and precipitation interact over ocean waters, with the goal of producing more accurate Earth System Models.

Lead researcher David Mechem, professor and chair of geography & atmospheric science at KU, will use a wide array of data collected at the Atmospheric Radiation Measurement Program (ARM) facility on Graciosa Island in the Azores, a region of the eastern North Atlantic known for ample marine low-altitude clouds. While previous research has examined how aerosols influence radiation and precipitation, Mechem said his work will be among the first to parse in such detail how precipitation and other processes in turn influence aerosols in the atmosphere.

“The act of precipitation forming and then falling — it acts to remove the aerosol from the atmosphere,” Mechem said. “Even just a rainstorm cleans it out. You know how everything seems so clean and pristine after it rains? We call it aerosol processing or coalescence processing, this removal of aerosol from the precipitation process. What happens, then, if you try to get new cloud formation, you’re going to be dealing with a very different aerosol environment. That’s going to have implications for the brightness of the clouds that form and how prone they are to precipitation. We’ll be studying the backside of that aerosol-cloud-precipitation interaction loop. It’s something that hasn’t been studied much, and it’s important to understand, fundamentally, what governs that process.”

The KU researcher will combine ARM data from the Azores site, observations from a previous ARM aircraft field campaign called the Aerosol and Cloud Experiments in the Eastern North Atlantic, and fine-scale modeling datasets. He said he would rely on long-standing collaborations with DOE laboratory scientists to provide guidance in the use of the ARM data products.

“We’ll use ’Large-eddy Simulations,’ which are fluid-dynamic simulations to probe some of these different mechanisms in a very high-resolution model — much higher resolution than current climate models,” Mechem said. “We can see updrafts and downdrafts, and we can see individual clouds and we can calculate how individual clouds are processing the aerosol — then we can better figure out what’s going into the clouds, what’s coming out of the clouds, and what’s left after our cloud lives and dies.”

The work product of the data analysis and modeling efforts will be a more detailed, accurate understanding of marine boundary layer (MBL) aerosol-cloud-precipitation interactions, and how better to portray these interactions in climate models. According to DOE, “Response of these low clouds to changes in atmospheric greenhouse gases and aerosols is a major source of uncertainty in global climate models.”

Mechem said one work product could be a computer code with more precise models of cloud-processing of aerosols that could sharpen climate models produced by outside research groups.

“Individual clouds are too small and too short-lived for a climate model to directly capture, so you have to develop other approaches that accurately represent the effects of clouds. We’re trying to get the physics of clouds right so the models produce a credible estimate of climate change,” he said. “You want to better understand the physical processes that are happening and then also figure out a way to represent them in a computer model. We’re using observational and high-resolution modeling tools to better understand what’s going on and then we’re going to translate that understanding into improvements in how clouds are portrayed in the climate models.”

Computer simulations will be run on the KU Advanced Community Cluster.

“If you’re doing good science, you quantify uncertainty,” he said. “You have some estimate of what you think the answer is — then you have a range, plus or minus. Part of the reason for paralysis on the climate problem is you can always say, ‘You don’t know because there’s uncertainty.’ Well, yes, there’s always uncertainty. I think the climate models are generally doing a good job, but some parts of their physics are less advanced than other parts. This project is filling in an important aspect of something that’s missing — how clouds influence aerosol, and we know aerosol are important.”

The DOE award also will support two students on the master’s or doctoral track in atmospheric science for the project’s duration.

“They do the work and get a degree out of it,” Mechem said. “It’s full sort of GRA support, a modest stipend and then their tuition covered, which is standard. Researchers typically either will do this or will use the award to get a postdoc — but generally I like supporting students.”