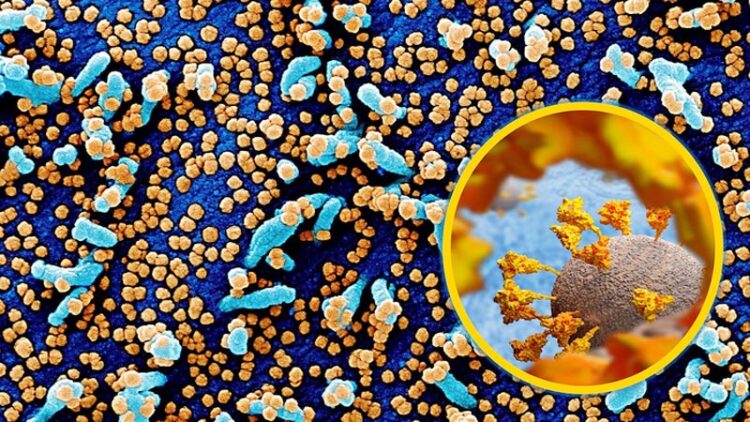 Colorized scanning electron micrograph of cells heavily infected with COVID-19 (SARS-CoV-2) virus particles (orange). The inset is an artist’s rendition of a single virus with its spike proteins — the sites acted upon by antibodies stimulated by COVID-19 vaccines. A Johns Hopkins Medicine study suggests antibody levels stay higher over an extended period of time in people who were infected by the virus and then received two doses of vaccine.
Graphic created by M.E. Newman, Johns Hopkins Medicine, using public domain images. Micrograph courtesy of the National Institute of Allergy and Infectious Diseases and SARS-CoV-2 artwork courtesy of UK Research and Innovation’s MRC Laboratory of Molecular Biology

In what is believed to be one of the largest studies of its kind, Johns Hopkins Medicine researchers have shown that antibody levels against SARS-CoV-2 (the COVID-19 virus) stay more durable — that is, remain higher over an extended period of time — in people who were infected by the virus and then received protection from two doses of messenger RNA (mRNA) vaccine compared with those who only got immunized.

A research letter detailing the study of nearly 2,000 health care workers appears today in the Journal of the American Medical Association.

“This finding adds to our understanding of how immunity against SARS-CoV-2 works, and builds upon an earlier study by our team that showed the mRNA vaccines yielded a robust antibody response, even if a person did not develop significant symptoms following vaccination or did not have a prior SARS-CoV-2 infection,” says study senior author Aaron Milstone, M.D., M.H.S., professor of pediatrics at the Johns Hopkins University School of Medicine and pediatric epidemiologist at Johns Hopkins Children’s Center.

The two mRNA vaccines evaluated in the study introduce the body’s immune system to S1, a protein subunit that’s a component of the spikes found on the surface of SARS-CoV-2. The spikes enable the virus to latch onto healthy cells and infect them. Immunoglobulin G antibodies, elicited by S1 from the vaccines stimulating the immune system, neutralize the virus particles, preventing infection by SARS-CoV-2, or at least, reducing the severity of the disease.

For their latest study, the researchers followed 1,960 Johns Hopkins Medicine health care workers who had received both doses of either the Pfizer/BioNTech or Moderna vaccines, including 73 people who had a positive SARS-CoV-2 polymerase chain reaction (PCR) test result before the first vaccine dose. The 73 were divided into two groups — those who were infected at 90 days or closer to the first vaccine dose, and those whose exposure to the virus was more than 90 days before the initial shot.

After adjusting for vaccine type, age and sex, antibody levels were compared for those with and without prior SARS-CoV-2 infection at one, three and six months following the second vaccine dose. In addition, antibody levels were compared at one and three months following the second dose between the two groups with prior SARS-CoV-2 infection.

“We found that health care workers with prior SARS-CoV-2 infection followed by two doses of mRNA vaccine — therefore, three independent exposures to the S1 spike protein — developed higher antibody levels than those with vaccination alone,” says study lead author Diana Zhong, M.D., an infectious diseases fellow at the Johns Hopkins University School of Medicine. “The relative differences were 14% higher at 1 month following the second vaccine dose, 19% at three months and 56% at six months.”

Zhong adds that the study participants with a PCR-confirmed SARS-CoV-2 infection more than 90 days before their initial vaccination had adjusted antibody levels 9% (one month following the second vaccine dose) and 13% (three months following the second vaccine dose) higher than those who were exposed to the virus less than or equal to the 90-day mark.

“This suggests that a longer interval between infection and first vaccine dose may enhance the antibody response,” says Milstone.

Milstone says further investigation is needed to determine whether increased post-vaccination durability in previously infected people is attributable to the number of exposures to the virus, the interval between exposures, or the interplay between natural or vaccine-derived immunity.

The study team at Johns Hopkins Medicine was co-led by Zhong and Shaoming Xiao. Along with them and Milstone, the team includes Amanda Debes, Emily Egbert, Patrizio Caturegli and Elizabeth Colantuoni.

None of the authors have any financial disclosures or conflicts of interest to disclose.