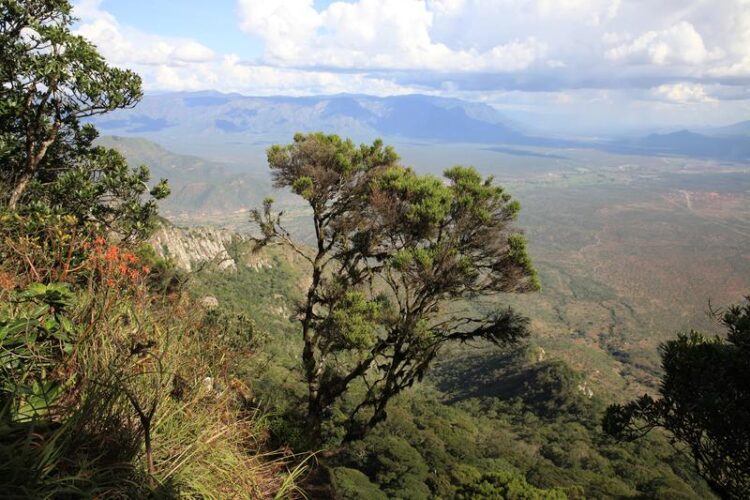 Climate and soil conditions, but also the influence of humans are decisive for the biodiversity of a forest, here: the South Pare Mountains in Tansania.
Photo: Andreas Hemp

The number of tree species growing in regions close to the equator is significantly higher than in regions further north and south of the earth. An international study published in „Nature Ecology and Evolution“ investigates the causes of this with a precision never before achieved. It emphasizes that the diversity of tree species in the tropics does not depend solely on bioclimatic factors. The study is based on a cooperation of 222 universities and research institutions. On the part of the University of Bayreuth, PD Dr. Andreas Hemp, who has been researching vegetation in mountainous regions of East Africa for more than 30 years, was involved in this international research.

The latitudinal diversity gradient (LDG) is a pattern often observed in research for the global distribution of plant and animal species. In general, the higher the northern and southern latitude, the lower the species diversity. This is also true for trees, whose species were estimated at 73,000 worldwide in a previous international study. However, the factors that contribute to species diversity in different regions of the world and the degree of their respective influence are far from being adequately researched. The new study, which now examines the diversity of tree species on the world’s forested areas, is based on a systematic analysis of data obtained from around 1.3 million forested sample areas on Earth. The authors list 47 different possible influencing factors and divide them into the following categories: bioclimate, terrain characteristics, vegetation, landscape conditions, human influences and soil conditions. Especially numerous are the bioclimatic influencing factors, for example the temperatures and precipitation in the course of the year.

Research contributions of the University of Bayreuth: Biodiversity on Kilimanjaro

“Never before has there been such a comprehensive and detailed investigation regarding the question of what causes the occurrence of tree species and their diversity in the forested regions of the earth,” says Bayreuth biologist PD Dr. Andreas Hemp of the Chair of Plant Systematics. For more than 30 years, he has been researching the plant world in East Africa together with partners in Europa, Kenya and Tanzania. Within the framework of the joint project “Kili-SES”, funded by the German Research Foundation (DFG), he is investigating the changes in vegetation on Kilimanjaro and the climatic, economic and social causes involved. Together with a team of students and doctoral candidates from Bayreuth, he has established research areas on Kilimanjaro at altitudes between 800 and 4,600 meters. Here, he systematically determined the species diversity of the trees and investigated the main factors that influence it.

However, Dr. Andreas Hemp believes that this conclusion is premature: “In our work, we have found that the species composition of the forests on Kilimanjaro and the number of tree species growing here change mainly as a function of temperature and precipitation. Bioclimatic factors therefore play a dominant role. It is true that anthropogenic influences can be seen in many places in the forests of East Africa, especially in connection with the timber industry. But also numerous forest areas in Western and Central Europe have been intensively managed for centuries. Therefore, it does not seem immediately plausible that humans should have a stronger influence on species diversity in the regions around the equator than in our northern latitudes. Furthermore, it is not unproblematic that the study relies on global climate databases. Especially in tropical mountains, where climatic conditions change strongly within a small area and where climate stations are largely missing, the data of such databases with their coarse resolution are very unreliable. With regard to the weighting of factors determining species diversity in tropical forests, further, more refined studies are therefore still needed.” The Bayreuth biologist therefore shares the study’s call for more comprehensive data to be collected with the support of experts from forestry and biodiversity research in order to gain a clearer picture of tree species diversity in forested areas of Africa.