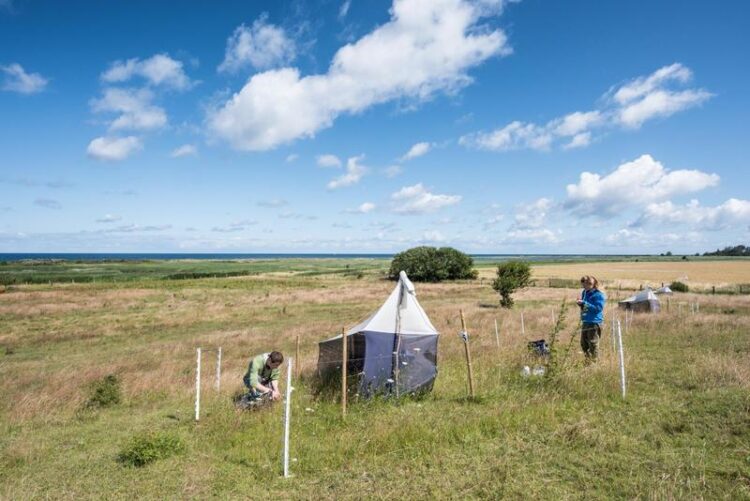 … due to surrounding farmland.

Insect decline is also progressing in German nature reserves. One reason for this is the intensification of agriculture. In a study recently published in the journal “Biodiversity and Conservation”, a team of authors led by biodiversity researchers Florian Dirk Schneider of ISOE – Institute for Social-Ecological Research and Sebastian Köthe of NABU – Nature and Biodiversity Conservation Union Germany shows that farmland in the vicinity of protected areas can have a negative impact on insect diversity within the protected areas. For effective insect conservation, the authors recommend a local dialogue between nature conservation and agriculture.

Now, for the first time, a research team investigated the correlation between insect diversity and agricultural activity at the border between nature reserves and farmland nationwide. For this purpose, the research project “DINA – Diversity of Insects in Nature Conservation Areas” created a unprecedented collection of data on biodiversity and possible causes of damage that was gathered at 21 representative observation sites. In addition to recording plant diversity and insect diversity through novel DNA analyses, data on land use and pesticide contamination of soils and insects were also collected.

A first evaluation of the data set has now been published in the journal “Biodiversity and Conservation”. “With the new data, we can show for the first time that agricultural activity in the vicinity of nature reserves has a negative impact on insect diversity in protected areas,” says ISOE researcher Florian Dirk Schneider. “We have seen that with regard to the wider surroundings of protected areas, there is a correlation between a high proportion of arable land and low insect diversity,” says NABU expert Sebastian Köthe. The number of pesticides to which insects are exposed also depends on the proportion of agricultural land. The scientific analysis of the data also showed: “Even large nature conservation areas in the vicinity of an observation site cannot compensate for the negative influences of agricultural land”.

But what could be the solutions? “In German nature conservation areas we find a variety of situations. Therefore, solutions cannot be one fits all,” says Schneider. In the series of dialogue meetings that ISOE conducted with farmers and nature conservationists, it turned out that the communication of scientific data on the state of biodiversity and possible causes of harm to the insects does not automatically lead to action for insect protection. The implementation of measures often fails due to various obstacles. On the one hand, the legal framework and funding opportunities are perceived as insufficient or even obstructive by the actors involved in practice. On the other hand, it is not always possible to conclude from the data sets collected nationwide, how well local populations of insects fare and whether observed pollutant loads are problematic or not. This makes it difficult to decide on insect protection measures in agriculture and nature conservation.

“We see a need for more in-depth knowledge among all those involved about causes and correlations. This lack concerns, for example, knowledge on the actual harm done to insects in the local protected area by pesticides or due to other causes not related to agriculture. Data are also needed on the effectivity of proposed measures for insect protection,” reports Schneider. For the authors of the study, it is therefore clear that the collection of site-specific data on insect diversity is just as important for successful insect conservation as the development of conservation measures in cooperation with all stakeholders. The close involvement of science, agriculture and nature conservation must also include the sharing and interpretation of the data. “Where stakeholders from agriculture and nature conservation engage in constructive dialogue directly on site, there is also a willingness to act in line with common goals and a determination to promote insect diversity in the protected area,” says Schneider.

The study “Improving insect conservation management through insect monitoring and stakeholder involvement” was published in the journal Biodiversity and Conservation and was conducted in the course of the research project “DINA – Diversity of Insects in Nature Conservation Areas”. In the transdisciplinary research project that is funded by the Federal Ministry of Education and Research (BMBF), nine partner institutes have been working on insect diversity in nature conservation areas under the leadership of NABU since 2019. At representative sites, flying insects were recorded and documented by the Entomologischer Verein Krefeld (EVK) and NABU volunteers using malaise traps. Evaluation using modern molecular methods of species identification via DNA analysis (metabarcoding) was conducted by the Leibniz Institute for the Analysis of Biodiversity Change in Bonn, vegetation analysis was done by the University of Kassel, and trace substance analysis by the University of Koblenz-Landau. The IÖR (Leibniz Institute of Ecological Urban and Regional Development) analysed geodata around the study sites. The social science analyses were done by the International Centre for Sustainable Development (IZNE) of the Hochschule Bonn-Rhein-Sieg, University of Applied Sciences. ISOE – Institute for Social-Ecological Research conducted dialogue workshops in three nature conservation areas in Germany.