A study of 377,000 sheds light on the role played by the genome in eczema 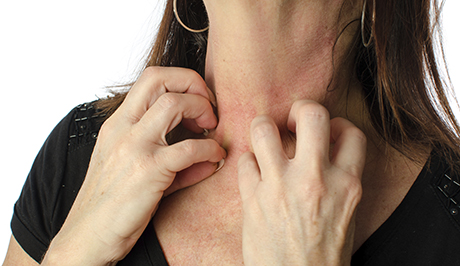 A study of 377,000 sheds light on the role played by the genome in eczema University of Gothenburg

The team of international researchers that conducted the largest genetic study of atopic dermatitis to this point pooled data obtained from 377,000 subjects in 40 different projects around the world.

“We identified ten new genetic variations, making a total of 31 that are currently known to be associated with atopic dermatitis,” says Bo Jacobsson, a professor at Sahlgrenska Academy who was a member of the team. “Of particular interest is that each of the new ones has a role to play in regulation of the immune system.”

The researchers found evidence of genetic overlap between atopic dermatitis and other illnesses, including inflammatory bowel disease.

“While the new variations contribute in only a small way to the risk of developing atopic dermatitis, knowing about them will raise our awareness about the mechanisms of the various diseases,” Professor Jacobsson says. “Our ultimate hope is that additional treatment methods will emerge as a result.”

Although the importance of genetic factors in the pathogenesis of atopic dermatitis had already been established, the sheer size of this study allowed researchers to fine tune their understanding and obtain more information about the ways that autoimmune mechanisms run amok as the disease develops.