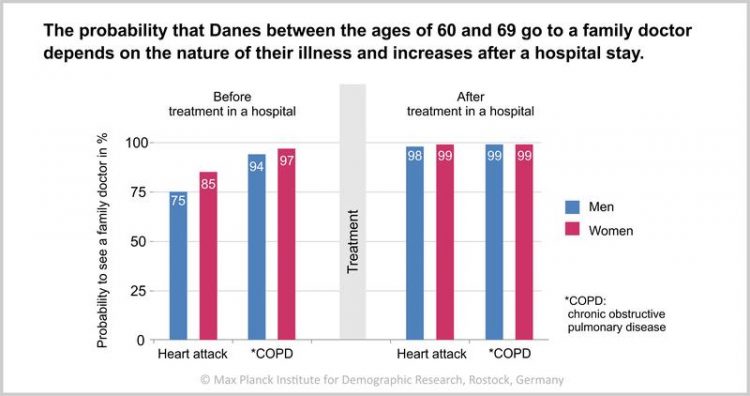 The researchers analysed data from Danish health registers to find out whether men and women, with the same disease, have different health behaviors. MPIDR

Following a heart attack 98 percent of male patients and 99 percent of female patients between the ages of 60 and 69, had contact with a family doctor in Denmark. This shows that gender differences in health behaviors level off after a stay in hospital.

In order to assess these important changes in gendered health behaviors Andreas Höhn, Jutta Gampe, and Anna Oksuzyan from the MPIDR, evaluated over 65,000 anonymized patient records from Danish registries.

The data covered the time period between 1996 and 2011 and detailed the number of visits to the doctor in the three year period before and after a stay in hospital for the following diseases: stroke, heart attack, gastrointestinal cancers, and chronic obstructive pulmonary disease. The results were published in the Journal of Epidemiology and Community Health.

“For the first time, we have investigated in great detail, and with a data set for a whole population, how men and women with the same disease behave,” says Andreas Höhn, who now works at the University of Edinburgh. The researchers also identified men and women who did not go to the doctor – because it was precisely these people who were not captured in the data used in similar studies in the past.

There is one exception: the behavior of men and women with chronic obstructive pulmonary disease. Regardless of gender, these patients frequently attended the family doctor even before a stay in hospital.

Among those who were treated in hospital for chronic obstructive pulmonary disease, 94 percent of men and 97 percent of women had seen a family doctor before staying in hospital. These patients are more likely to have suffered from clear symptoms before requiring a stay in hospital.

After a stay in hospital, there were still small gender differences in the number of visits to the family doctor. The researchers think this is because men and women have different survival rates following a stay in hospital.

“Even if men and women exhibit exactly the same behavior and have the same disease, more women will survive,” says Andreas Höhn. Many women would then see a doctor more often due to the ongoing health issues that resulted from the disease.

The Max Planck Institute for Demographic Research (MPIDR) in Rostock investigates the structure and dynamics of populations. The Institute’s researchers explore issues of political relevance, such as demographic change, aging, fertility, and the redistribution of work over the life course, as well as digitization and the use of new data sources for the estimation of migration flows. The MPIDR is one of the largest demographic research bodies in Europe and is a worldwide leader in the study of populations. The Institute is part of the Max Planck Society, the internationally renowned German research organization.