Because not only arguments count 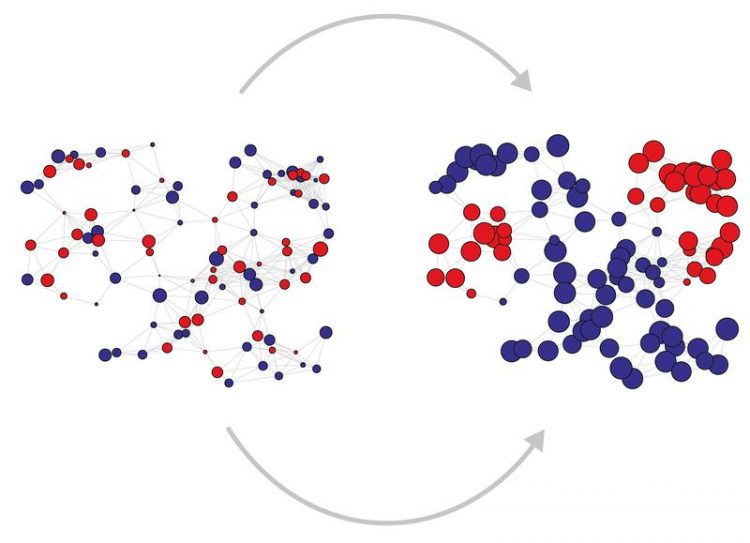 Computer simulations show how polarization evolves and develops over time. © Max Planck Institute for Mathematics in the Sciences

We all react very sensitively to positive or negative signals in the behavior of our peers and unconsciously include this feedback in our own decision-making. Motivated by psychological research into implicit processes of attitudinal change, MPI scientists affiliated to the ODYCCEUS project (Opinion Dynamics and Cultural Conflict in European Space) are exploring a new opinion-forming mechanism in which agents within a network evaluate alternative views based on the received social feedback.

If an opinion favored by the agent meets with high agreement in the social environment, this is regarded as positive feedback and this, in turn, reinforces the value associated with this opinion. Of course, this also applies in the opposite case with negative feedback: disagreement among peers leads to decreased attachment to a certain opinion and to a reevaluation of one’s position. In interconnected networks of sufficiently high modularity, this leads to the formation of very strong beliefs among different groups of agents.

Two basic properties combine to create and maintain polarization in the proposed model. On the one hand, the described amplification mechanism results in a group polarization process, which can be considered as a repetitive stochastic game. As a result of feedback, an initially already cohesive subgroup within the system tends to align towards a single opinion over time, which may even lead to an extreme direction. This process leads to the formation of opinion clusters.

On the other hand, real social networks are never complete, but have a rather complex structure with some gaps. These have a so-called “gate-keeping” function, which prevents occasional contradictory opinions from overcoming structural gaps within the groups and thus spreading over the entire network.

“Unlike other existing models, our model emphasizes an affective and emotional route to the phenomenon of polarization. These mechanisms are gaining importance, especially in relation to new media, and the model is a first step in taking into account intrinsic motivations behind opinion expressions.

The approach of reinforcement learning is, in my opinion, particularly suitable because on the one hand it is psychologically sound and sociologically compatible and on the other hand it allows a connection to game theory concepts and thus allows for mathematical analysis. “Sven Banisch, research assistant in the EU Odycceus project.

In the given case, this combination allowed the scientist to precisely determine which structural features are a condition for the stability of polarized opinion patterns. They proved that the existence of cohesive subgroups is a sufficient condition to produce a stable polarization, even if these subgroups have the opportunity to interact with each other.

With their work, the scientists want to contribute to a better understanding of the phenomenon of polarizing opinions, as we often see them in political discourse today, and to gain deeper insights into the mechanisms underlying these processes. The scientists of the Odycceus research group see a great potential to map these processes also on digital media in order to better analyze and understand mechanisms of opinion formation and exchange in social networks.