Studies on electric polarization at Argonne 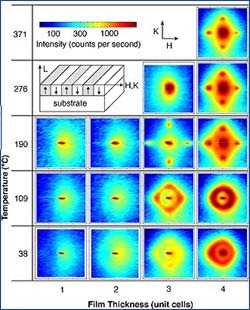 INTENSE EFFECT — This series of images shows the intensity of ferroelectricity – the ability to retain a switchable electric polarization – over a range of temperatures. <br>

Researchers from the U.S. Department of Energy’s Argonne National Laboratory and Northern Illinois University have shown that very thin materials can still retain an electric polarization, opening the potential for a wide range of tiny devices.

The researchers found that the ferroelectric phase – the ability to hold a switchable electric polarization – is stable for thicknesses as small as 1.2 nanometers, one-billionth of a meter, or a size several hundred thousand times smaller than the period at the end of this sentence.

Previous studies had found that, as the material became too thin, it quit being a ferroelectric. These new results, however, suggest that small thicknesses do not pose a fundamental problem to building very small devices based on these materials. The research is published in the June 11 issue of Science magazine.

“The natural ordering of the atoms in their crystal structure cause these materials to be electrically polarized,” said researcher Carol Thompson of NIU. “This means that, in the jargon of the scientists, these ferroelectric materials exhibit rich and complex couplings between their optical, chemical, mechanical, structural and thermal properties. Alterations of the natural structure due to size and surface effects will perhaps destroy their ability to perform as ferroelectrics. However, we will be relying on these materials to behave themselves. Will they? The research suggests that they will behave better than we had any right to expect before.”

Subscribe to What’s New at Argonne, a monthly e-mail newsletter that summarizes stories from Argonne’s home page and other Argonne news and provides links to additional information.

An increasingly wide range of applications are based on ferroelectric thin films, including sensors, microelectromechanical systems and memory systems. Studies of ferroelectrics have become more intense in recent years, as devices – and the materials and thin films used to manufacture them – have become smaller, moving to the micro- and even the nano-scale, creating machines and building blocks of electronic devices smaller than the width of a human hair. The technological potential of these materials depends on maintaining a stable ferroelectric phase as devices continue to be miniaturized.

The researchers used the powerful X-ray beams from the Advanced Photon Source at Argonne – the nation’s most brilliant X-rays – to monitor the electric transition in thin films as they are grown, layer by layer.

Argonne is building a new Center for Nanoscale Materials that will provide enhanced capability to fabricate and study novel materials and devices at the nanoscale.

The authors are D.D. Fong, G.B. Stephenson, S.K. Streiffer, J.A. Eastman, Orlando Auciello and P.H. Fuoss of Argonne and Carol Thompson of NIU. Funding is provided by the Office of Basic Energy Sciences, part of the Department of Energy’s Office of Science, and by the State of Illinois.

The nation’s first national laboratory, Argonne National Laboratory conducts basic and applied scientific research across a wide spectrum of disciplines, ranging from high-energy physics to climatology and biotechnology. Since 1990, Argonne has worked with more than 600 companies and numerous federal agencies and other organizations to help advance America’s scientific leadership and prepare the nation for the future. Argonne is operated by the University of Chicago for the U.S. Department of Energy’s Office of Science.