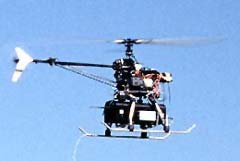 Australian scientists have developed a ’brain’, which enables the production of a world-first low-cost, intelligent small helicopter, set to end many difficult and dangerous tasks undertaken by humans.

The CSIRO Mantis can simply be told where to go and what to do, and it will go off, do the job and find its own way home, unassisted.

Dr Peter Corke of CSIRO Complex Systems Integration says, “Mantis makes it possible for fleets of small drone helicopters to do jobs now done by conventional aircraft. This could lead to a quantum leap in the speed of air sea rescue efforts – covering many square kilometres faster by having many small aircraft searching at the same time”.

“It could inspect and report on the condition of infrastructure such as powerlines, where currently manned, full-scale helicopters are used to look for faults and assist bushfire prevention by looking for close growing trees.”

The CSIRO Mantis can take the human-risk from getting a closer than human-look underneath bridges, at high-rise building facades, at mine-faces for stability or even in building lift-wells.

Traffic monitoring, security and military applications offer a large number of other uses for small, intelligent UAVs such as the Mantis.

“It was also our aim to develop an inexpensive system where the cost of the electronics, now mostly almost ten times more expensive than the helicopter, would instead be about the same price”.

“The major task in developing Mantis”, Dr Corke says, “was to produce an inertial sensing system and a computer vision system to control and provide flight stability and to guide the aircraft”.

“The inertial sensing system behaves somewhat like our inner ear, providing balance and indicating the orientation of the helicopter in the air. The instrument, custom developed by CSIRO (see photo), uses low-cost MEMS (Micro-Electro-Mechanical Systems) sensors and is fabricated from magnesium alloy and weighs only 75 g.”

“This is much lighter than current technology and is one of the major reasons we were able to make the brains of the Mantis light enough to be carried by such a small helicopter”, Dr Corke says.

“Just as we use our two eyes to estimate the distance of an object, the helicopter uses the data from the two cameras to estimate its height above ground, a very important thing to know.”

“The computer also observes the changes in the image over time and from this it estimates its speed over the ground”, says Corke.

Developing lightweight components and dealing with vibration has been an important factor of the success of the Mantis to date.

The Mantis is a little over 0.5 m high and just short of 1.5 m long, with a custom-built aluminium frame and landing gear.

The military are also interested in UAVs, and this technology has received a lot of media attention this year. Dr Corke says, “They have generally used very precise GPS guidance equipment, which require an expensive unit onboard the aircraft as well as expensive equipment on the ground”.

“While GPS may seem like an ideal technique to use, it has many drawbacks in practice, particularly in built environments near large structures which can obscure or reflect the signals from the GPS satellites.”

The CSIRO Mantis is ready to become a regular feature in everyday life in Australia, subject to being programmed for each task a potential customer may require it to perform.

Our civil aviation system has already introduced the world’s first regulations to allow appropriately equipped and certified UAVs to share the skies.

CSIRO is looking for partners interested in commercialising the Mantis’s brain for aftermarket applications for production helicopters.