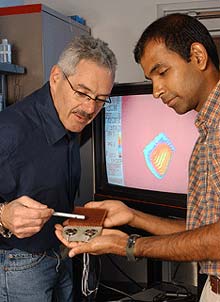 The patented technologies – synthetic jets that rely on trains of turbulent air puffs and a system that uses vibration to atomize cooling liquids such as water – were developed by Professor Ari Glezer and co-workers at the Georgia Institute of Technology’s School of Mechanical Engineering. The pair of technologies has been licensed to Atlanta-based company Innovative Fluidics, which will use them to meet a broad range of electronics cooling needs.

“There is a lot of concern in the electronics industry about thermal management,” said Raghav Mahalingam, a research engineer in Georgia Tech’s School of Mechanical Engineering. “New processors are consuming more power, circuit densities are getting higher and there is pressure to reduce the size of devices. Unless there is a breakthrough in low-power systems, conventional fan-driven cooling will no longer be enough.”

Processors, memory chips, graphics chips, batteries, radio frequency components and other devices in electronic equipment generate heat that must be dissipated to avoid damage. Traditional cooling techniques use metallic heat sinks to conduct thermal energy away from the devices, then transfer it to air being circulated by fans.

However, cooling fans have a number of limitations. For instance, much of the circulated air bypasses the heat sinks and does not mix well with the thermal boundary layer that forms on the fins. Fans placed directly over heat sinks have “dead areas” where their motor assemblies block air flow. And as designers boost air flow to increase cooling, fans use more energy, create more audible noise and take up more space.

Simple and with no friction parts to wear out, a synthetic jet module in principle resembles a tiny stereo speaker in which a diaphragm is mounted within a cavity that has one or more orifices. Electromagnetic or piezoelectric drivers cause the diaphragm to vibrate 100 to 200 times per second, sucking surrounding air into the cavity and then expelling it. The rapid cycling of air into and out of the module creates pulsating jets that can be directed to the precise locations where cooling is needed.

The jet cooling modules take up less space in cramped equipment housings, and can be flexibly conformed to components that need cooling – even mounted directly within the cooling fins of heat sinks. Arrays of jets would provide cooling matched to component needs, and the devices could even be switched on and off to meet changing thermal demands. Though the jets move 70 percent less air than fans of comparable size, the air flow they produce contains tiny vortices which make the flow turbulent, encouraging efficient mixing with ambient air and breaking up thermal boundary layers.

“You get a much higher heat transfer coefficient with synthetic jets, so you do away with the major cooling bottleneck seen in conventional systems,” Mahalingam said.

The ability to scale the jet modules to suit specific applications and to integrate them into electronic equipment could provide cooling solutions over a broad range of electronic hardware ranging from desktop computers to personal digital assistants (PDAs), mobile phones and other portable devices that are now too small or have too little power for active cooling.

The synthetic jets could be used by themselves, to supplement fans or even in conjunction with cooling liquid atomization. “We will fit in where there currently is no solution, or improve on an existing solution,” said Jonathan Goldman, a commercialization catalyst with Georgia Tech’s VentureLab, a program that helps faculty member commercialize the technology they develop.

Beyond the diaphragm, the system requires an electronic driver and wiring. Goldman expects the jets to be cost competitive with fans and easier to manufacture. Further energy savings could be realized by using piezoelectric actuators.

“One of the practical implications of this technology could be to forestall the need to use costlier heat sinks made from copper,” he said. “The industry could continue to use aluminum and retain its advantages of design simplicity, lower cost and lower weight.”

For those higher demands, Innovative Fluidics has licensed technology known as vibration-induced droplet atomization (VIDA), a sophisticated system that uses atomized liquid coolants – such as water – to carry heat away from components. Also developed at Georgia Tech by Glezer’s group, VIDA uses high-frequency vibration produced by piezoelectric actuators to create sprays of tiny cooling liquid droplets inside a closed cell attached to an electronic component in need of cooling.

The droplets form a thin film on the heated surface, allowing thermal energy to be removed by evaporation. The heated vapor then condenses, either on the exterior walls of the cooling cell or on tubes carrying liquid coolant through the cell. The liquid is then pumped back to the vibrating diaphragm for re-use.

The company believes the VIDA technology offers advantages over competing heat pipes, spray cooling and thermosyphon systems. The technology, whose development has been supported by SBIR and STTR Phase I grants, has been demonstrated in the lab using a prototype cell 50 mm in diameter and 20 mm high.

Innovative Fluidics was launched in January 2003. In addition to Glezer, Goldman, Mahalingam and Heffington, the company includes Tyler Magruder as vice-president of business development.

The company has produced several prototype SynJets and expects to have commercial products available within 15 months. The VIDA technology will take longer, but will ultimately allow Innovative Fluidics to cover a range of cooling needs with the two systems – and hybrids using both technologies.