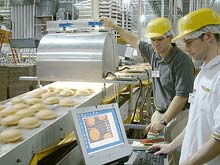 The perfect bun: That’s one of the goals of an automated product-inspection prototype under development by Georgia Tech researchers working with Flowers Bakery in Villa Rica, Ga.

The first phase of the work is introducing continuous imaging technology to the large-scale production of sandwich buns for fast-food restaurants, which hold to exacting product specifications.

The fresh-baked buns are scanned by a digital camera as they move along Flowers’ production line. Items not measuring up in terms of color, shape, seed distribution, size or other criteria are identified by the computerized eye’s imaging software and eventually removed automatically from the conveyor.

The system concept is under development by engineers from the Georgia Tech Research Institute’s (GTRI) Food Processing Technology Division in association with researchers from Georgia Tech’s School of Electrical and Computer Engineering (ECE) and BakeTech, a baking equipment manufacturer in Tucker, Ga.

The project was made possible, in part, by funding from Georgia’s Traditional Industries Program for Food Processing, a 10-year-old research and development program designed to improve the market competitiveness of Georgia’s food processing industry — the state’s second-largest employer. The Food Processing Advisory Council (FoodPAC) oversees such state-funded research grants.

The computerized imaging system in development will automate the inspection process at Flowers. Ultimately, the new approach will save money and time by increasing yield and reducing waste, says Doug Britton, a GTRI research engineer and co-principal investigator for the project.

“It should reduce the time between noticing a problem and fixing it,” Britton explains. Also, the system will automatically record data, such as product count and the number of out-of-spec buns, to generate production reports. “Flowers will have all this data immediately for doing statistical process control so they can implement changes that reduce the number of poor-quality buns,” he adds. “They’ll get a better handle on what they are producing.”

The second phase of the project will extend automation by providing in-line mechanisms to correct the vagaries leading to poor-quality products. Proofers and ovens — the heat- and humidity-controlled chambers where dough is sent to rise and bake — are subject to normal disturbances that can affect product quality. Automatically compensating for those disturbances reduces time spent correcting problems.

School of Electrical and Computer Engineering researchers, working with the GTRI team, are using data from the screening and image-processing phase and from additional sensor inputs to build a supervisory control system. It will be able to make changes in the proofer and oven settings to fix problems as they are detected.

“Baking is both a science and an art,” says Professor Bonnie Heck, Britton’s colleague from ECE. “Good bakers know both and are able to react based on experience and feedback from the process. We’re trying to enhance the ability of expert and novice bakers alike to make better quality-control adjustments, while also adding automation that can mimic some of those adjustments dynamically.”

While the computerized quality-control and self-correcting production system holds great commercial promise for the baking industry, Britton says, generic aspects of the technology may be adapted to other food processing industries as well.