Robot Easily Finds Its Way Around 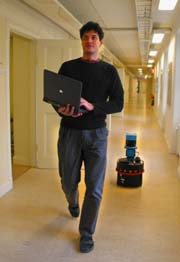 New technology from the Royal Institute of Technology (KTH) in Stockholm is teaching a household robot a more efficient way to get around a house, for example. The method was recently awarded a prize for the best contribution among 500 others at IROS, one of the world’s largest robot conferences.

Philipp Althaus describes the concept in his dissertation, to be defended on November 21. Robots are making their way into our homes, toy robots and simple household robots. This is a clear trend, and by 2005 the market estimates that more than twice as many household and toy robots will be sold in the world compared to today.

A major problem for a household robot is how to get around in an unknown environment. A chair that has been moved or a person standing in the way can easily confuse a robot. Several earlier attempts have involved programming an enormous amount of map data about the environment: Where are the walls? What does every obstacle look like in detail? How far is it between this thing and that thing? This is not an efficient way to go, since the amount of data grows exponentially with the surface the robot is to navigate. The more data there is, the more the robot has to think, and the slower it moves. Nor is a robot especially good at improvising when unexpected obstacles turn up. Computing power is no guarantee of success.

Therefore, Philipp Althaus has approached the problem from another angle and posed the question: what does the robot need to know?

By reducing the map to a few set positions and by having the robot feel its way around on its own between these positions, a great deal of computing power can be saved. Obstacles the robot encounters on the way can be “forgotten” immediately afterward. The point is to clear the brain of the robot from unnecessarily detailed information. The robot makes its way around using ultrasound and lasers.

The dissertation will be publicly defended on November 21, directed by Professor Henrik Christensen.