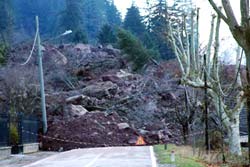 A view of the debris caused by a landslide on the provincial road in Bindo, on the outskirts of Cortenova near Lecco, northern Italy on 1 December 2002. More than 1000 people were evacuated from their homes as potential landslides caused by heavy rains in northern Italy threatened the local population. <br>Credits: AP Photo - Stefano Cardini

One of the largest robots ever constructed will also be one of the most agile, thanks to technology derived from ESA space missions. Known as Roboclimber, this new climbing machine is designed to prevent landslides without endangering human lives.

Expertise from manoeuvring satellites into correct orbit has been used to develop the Roboclimber, which will be remotely controlled by a system originally built for ESA to control space robots and a robotic satellite arm.

Landslides are a serious problem in many countries and usually occur when the soil of a slope no longer binds together. A number of techniques have been developed to prevent landslides, nearly all of which are labour-intensive and often dangerous.

“Consolidating high slopes is a risky business – people often work on scaffolds at heights far above ground and next to unstable slopes,” says Giorgio Pezzuto, Project Manager from D’Appolonia in Genoa, Italy. “In 2001 we initiated a project to evaluate how innovative technologies could simplify this work and reduce human risks. The objective was to develop a robotic system to do the job.”

D’Appolonia, one of the technology brokers in ESA’s Technology Transfer Programme (TTP), worked with Italian construction firm ICOP and landslide-specialists TEVE to define the initial concept and the major technological hurtles to be overcome.

“We soon realised that the use of advanced space technologies could make it possible to create a large robot that could be directed by remote control to insert 20-metre-long rods into a potential risky slope – a conventional and well-recognised method of slope consolidation,” says Pezzuto. To do this, expertise and innovative systems used in space programmes were brought onboard from other European companies.

Roboclimber is the combined effort of seven companies across four European countries as well as one university and a research institute. Once complete, it will resemble a 3000-kg giant spider on four legs.

Designed to work on both horizontal and vertical surfaces, the legs move and position the drilling mechanism – consisting of a number of different rods and a robotic hand. The drill itself can make holes 20-metres deep and rotate within Roboclimber’s metal frame to reach the optimal drilling angle. The rods can then be inserted via remote control.

The position of the four legs, the equilibrium and all operational parameters can be continuously monitored through specific stability analysis software. Critical operational conditions that could impair operation or damage the robot can be identified and warnings, plus suggestions for the right corrective action, given in real time.

“The cost of slope consolidation can be reduced by up to 30% for large interventions, and in situations where only monitoring and small interventions are needed, cost saving could be as high as 80%,” says Pezzuto.

Maybe the most important aspect of the Roboclimber is that it will make risky jobs safer. Thanks to automated interventions and the use of remote control, accidents related to operating on high scaffolding can be eliminated; plus any sudden soil movement will endanger nobody as the operators will all be working from a safe distance.

“The system will also avoid the exposure of the operators to siliceous dust and loud noise,” adds Pezzuto.

Roberto Zannini of TEVE, who has carried out consolidation work on steep slopes for many years, will test the Roboclimber. According to Zannini “it may become an advanced method for intervention on steep rocky walls”.

When the first Roboclimber is tested and optimised Zannini plans to put it on the market. He has already received many requests from colleagues and clients.

This project is being run under the EU CRAFT programme, in which ESA participates through its TTP programme. D’Appolonia is coordinating the project and two of the participants: the University of Genoa, Italy and Space Applications Services (SAS) from Belgium are contributing space systems.

The robotics laboratory of the University of Genoa is involved in the mechanical design and in investigating ways to safely control Roboclimber in three dimensions – a technique evolved from earlier experience in attitude control of spinning satellites and computation of spacecraft manoeuvres to reach stationary orbits.

SAS is responsible for the system operators will use to control Roboclimber, a tailored version of SAS’s Flexible Automation and Operations User Station tool (FAMOUS), based on a robotics control system developed for ESA in 1997. The same system has also been used for the 3-kg micro-rover NANOKHOD, developed for ESA’s Technology and Research Programme, and for the robotic arm on the Japanese engineering test satellite ETS-VII).

The space-robot at work on Earth

When will we see Roboclimber, the latest example of technology transfer at work? The different pieces are now in production and a few months ago the Spanish partner tested the robot’s legs successfully. By December this year the frame with legs should be ready and a few months later the drilling parts will be mounted.

Field tests to drill holes are scheduled to take place in Italy in spring 2004. If these prove to be successful Roboclimber will be tested on an unstable slope next year.

“Space technologies from Europe have often resulted in amazing improvements to our lives on Earth,” says Pierre Brisson, Head of ESA’s Technology Transfer and Promotion Office. “Automating dangerous jobs and reducing human risks requires innovative technologies, many of which are available from our European space programmes.” Over the past 10 years ESA’s TTP has provided more than 160 space technologies to the non-space sector in Europe.