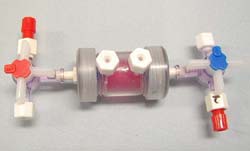 Researchers at Oxford University’s Department of Engineering Science have recently made great lengths in both engineering and monitoring 3-dimensional tissue.

Engineering tissue involves the seeding of appropriate cells into a scaffold to form a bio-construct or matrix. The Oxford team has improved this process by developing a new kind of nutrient circulation and scaffold system for 3-D bulky tissue culture. The scaffold, made from biopolymers or synthetic polymers, has a network of capillaries embedded within it that can service the cells that attach themselves to the scaffold, allowing new tissue to grow. The capillary network is made of semi-permeable membranes whose pore size is sufficiently small to keep cells from leaving the system.

The unique Oxford system employs biodegradable porous membrane capillaries to mimic the blood capillary network in natural tissue. Traditionally, engineered tissue is governed by the diffusion of nutrients from outside the scaffold, but this system employs a system of capillaries that deliver nutrients and remove metabolic waste deep inside. Additionally, the capillary membrane is biodegradable, meaning that as time progresses the pores will widen, allowing more nutrients in and waste out. The Oxford system not only allows tissue of greater density to be grown, but as the tissue becomes bulkier, epithelial cells can be introduced in to the capillaries to promote blood vessel formation. This invention enables the culture of 3-dimensional tissues opening the possibility of growing more complex structures (such as complete organs).

Engineered Tissue Probes
To monitor the engineered tissue from the new system, Oxford researchers have also developed a technology for the on-line monitoring of cell metabolic activity, cell viability, function and tissue status.

It is important to monitor cell activity and functions inside three-dimensional engineered tissue during the culture process in vitro in order to optimise the design and operation of the tissue culture process. It is also critical to monitor tissue status following transplant/implant (e.g. tissue grafts and implantation of engineered tissue). Possible techniques at present include MRI and ultrasound, but both are time consuming, expensive, give low resolution of images and only provide limited biochemical data.

Measuring the condition of grafted tissue and possible signs of cell stress following an implant or transplant, and measuring correct cell environment and growth in tissue cultures, is invaluable to the medical community. Addressing this need, the Oxford team has developed a micro membrane probe that samples soluble markers of cellular metabolism and tissue turnover both non-destructively and quantitatively within engineered tissue. The probe operates during culture periods in a bioreactor and allows for subsequent on-line and off-line analyses. The technology also has applications in meat and fish quality inspection (for contaminants such as bacterial toxins, heavy metals and pesticides).

Isis Innovation, the technology transfer company of the University of Oxford, has filed patent applications on both the new system for engineering tissue, and for the tissue probes. Isis welcomes contact from companies interested in commercialising these exciting new technologies.