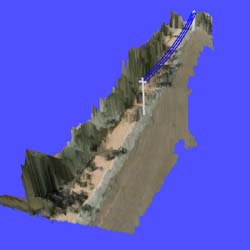 Three-dimensional display of the trees, the powerpoles and powerlines

Major blackouts such as those that hit North America last week can result from combinations of relatively small problems, such as trees growing too close to powerlines, according to Kevin Cryan, Business Development Manager with CSIRO Mathematical and Information Sciences.

“There seem to have been a number of factors that led to the recent disastrous blackouts but it’s been reported that one incident involved an overheated powerline sagging and making contact with trees,” says Mr Cryan.

The answer to reducing this threat could well lie in technology developed by CSIRO.

A pair of small cameras attached to the wings of an aeroplane form the basis of a unique system which actually measures the distances between powerlines and trees from the air.

The beauty of this technology is that hundreds of kilometres of powerlines can be inspected in a single flight, an operation that would take far longer by conventional means, Mr Cryan says.

Usually, powerlines are inspected by field teams that drive around and check clearances manually. When problems are found, maintenance crews can be sent to remedy the situation.

“As there are thousands of kilometres of powerlines stretching across the country, this is no small undertaking. Access to remote areas can be difficult and the associated costs are high,” says Mr Cryan

Power companies in Australia and most other developed countries are required to maintain a clearance space around powerlines.

“The planes fly over the powerlines, gathering visual data and the GIS determines the precise location at any moment. The software processes the image data into 3D, identifying powerlines, poles and nearby trees and then measures the distances between them,” Mr Cryan says.

“Deploying this technology involves obvious costs but these need to be weighed against the consequences of catastrophic failures like the one last week.”

Trees interfering with powerlines is not just a problem in terms of blackouts – it can also cause bushfires.

“This technology gives us is the ability to know that we have a problem before it causes a bushfire or a downed line or unhappy customers. It means a team can be sent directly to a potential problem area before the risks get too high,” says Mr Cryan.

The technology is now at the stage where it is ready for commercialisation.

“It may well be that, rather than each power company wanting to monitor its own lines in this way, a more efficient business model would be for someone to provide this as a service to all companies,” Mr Cryan says.