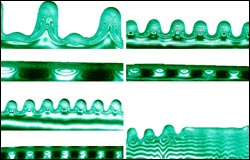 Video images under monochromatic illumination show the optical selection and control of thin film flow patterns on horizontal substrates. For each of the first three images, the film pattern is shown at two different times. The lower third of each image displays a thin film those contact line is initially straight. <br>Image copyright: Physical Review Letters <br>

Physicists at the Georgia Institute of Technology have demonstrated a new optical technique for controlling the flow of very small volumes of fluids over solid surfaces. The technique, which relies on changes in surface tension prompted by optically-generated thermal gradients, could provide the foundation for a new generation of dynamically reprogrammable microfluidic devices.

A paper describing the technique is the cover story for the August 1 issue of the journal Physical Review Letters. The research has been supported by the National Science Foundation and the Research Corporation.

Existing microfluidic devices, also known as “labs-on-a-chip,” use tiny channels or pipes etched into silicon or other substrate material to manipulate very small volumes of fluid. Such “micropipe” devices are just beginning to appear on the market.

The Georgia Tech innovation could allow production of a new type of microfluidic device without etching channels. Instead, lasers or optical systems similar to those used in LCD projectors would produce complex patterns of varying-intensity light on a flat substrate material. Absorption of the light would produce differential heating on the substrate, creating a pattern of thermal gradients. Surface tension, a relatively strong force at micron size scales, would then cause nanoliter volumes of fluid to flow from the cooler areas to warmer areas through thermocapillary action.

“We envision that this could move multiple droplets or packets of fluid simultaneously, allowing arrays of drops to be moving at the same time at multiple locations,” said Michael Schatz, a Georgia Tech associate professor of physics. “We could avoid putting detailed architectures onto the substrate. Instead, we would take advantage of advances in the miniaturization of optoelectronics to pattern the substrate with surface tension forces.”

Because the temperature gradients would be formed by computer-controlled light patterns, pathways for the droplets could be quickly changed, allowing a reconfiguration not possible with existing microfluidic devices. And because the surface tension effects are strong at the micron scale, they could produce flow rates higher than channel-based microarrays, which must overcome large frictional forces. Finally, the substrate could be easily cleaned between uses, avoiding contamination.

In their paper, Schatz and colleagues Roman Grigoriev and Nicholas Garnier report their studies of how thermal gradients affect thin films of silicone oil on a surface of glass. The bottom of the glass had been painted black to absorb light, and a heat sink provided to prevent overheating.

The technique could theoretically also use liquid surfaces, where droplets of an immiscible liquid would be moved across a “substrate” fluid by the same surface tension forces. In a liquid-on-liquid system, the underlying fluid would also move, allowing higher flow rates.

In biological applications, fluids of interest are based on water, but Schatz says the optical principle could apply to most liquids. “This technique could apply to many fluid systems because it builds on an intrinsic property that nearly every fluid has – the temperature dependence of surface tension,” he noted.

Though many technical hurdles remain, Schatz and his collaborators believe their technique could be the basis for a miniaturized lab-on-a-chip used for genetic or biochemical testing in the field. The easily reconfigurable system would be able to transport, merge, mix and split off streams of fluid flowing across a flat surface.

“If we can build devices that move fluids at small scales in a reconfigurable way, then in principle we can do all kinds of assays in the field at very high densities,” Schatz explained. “This approach could be applied in a lot of different conditions.”

Ultimately, the miniaturization of microfluidic devices could do for fluid handling what the modern semiconductor technology has done for electronics, allowing assays, chemical studies and other macro-scale processes to become smaller, cheaper and faster. “The shrinking of devices using microfluidics could be as revolutionary to our daily lives as microelectronics has been,” Schatz said.

Unlike microelectronics, however, the drive to make microfluidic devices smaller and denser faces an immediate fundamental limit – the size of cells, DNA samples or protein molecules. If those are to be moved in fluid form, the microarray features can’t be much smaller than a few microns.

Among the challenges ahead for building optically-driven microfluidic devices are controlling evaporation, developing interfaces to get the tiny volumes of liquid onto the surface, and choosing the right combination of substrate and heat sink to provide distinct temperature gradient patterns without overheating the fluids, notes Grigoriev, an assistant professor in the School of Physics.

“We are at the point of testing strategies for constructing the building blocks, much like the transistors of microelectronics,” he said. “Once those pieces are in place, it will be much more straightforward to bring them together into a working microfluidic device.”