Deep Sea Technology Is Put To The Test In Campus Tank 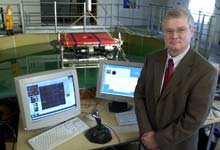 Photo A: Louis Whitcomb supervises underwater robotics research at Johns Hopkins, including a new lab that features a tank filled with nearly 43,000 gallons of water. <br>Photo by Jay Van Rensselaer

In a new indoor tank filled with almost 43,000 gallons of water, Johns Hopkins engineers are developing and testing computer control systems to serve as the “brains” for some of the world’s leading deep sea robotic exploration vehicles. To promote advances in underwater robotics, the Whiting School of Engineering recently constructed the circular hydrodynamics tank, 14 feet deep and 25 feet in diameter, inside a large lab space within Maryland Hall.

In the tank, researchers are testing the JHU Remotely Operated Vehicle, a small underwater robot developed at the university. Its navigation and control systems, also developed at Johns Hopkins, have recently been adapted and enhanced for use in the much larger Jason II vehicle, a new deep-sea oceanographic research robot operated by the Woods Hole Oceanographic Institution. The Johns Hopkins navigation program also has been deployed aboard the Deep Submergence Vehicle Alvin, Woods Hole’s inhabited oceanographic submersible.

Future navigation and control techniques devised in the new test tank are expected to improve the operations of deep-sea robots such as Jason II and Isis, a similar vessel that Woods Hole is developing for the University of Southampton in the United Kingdom.

“Our research goal is to develop new technology to enable new oceanographic research,” says Louis Whitcomb, associate professor in the Department of Mechanical Engineering, who is director of the new testing facility. “Moreover, we collaborate with other institutions like the National Deep Submergence Facility at Woods Hole Oceanographic Institution to deploy these new technologies for ocean science on vehicles such as Jason II and Alvin.”

Deep sea robots like Jason II are relatively new but increasingly important tools for scientists who want to explore some of Earth’s most remote and hostile frontiers. Human scuba divers can descend safely only about 300 feet, or 100 meters. Yet the deepest parts of the ocean lie 11,000 meters below the surface. To explore greater depths, scientists in the 1960s began building small inhabited submersibles. Such vessels have been used to explore the R.M.S. Titanic’s wreckage. But because such vehicles must carry their own fuel and air supplies, explorers are limited to eight to 12 hours per dive.

To overcome these limitations, engineers in the last 15 years have begun building uninhabited robotic vehicles that remain tethered to a research ship on the surface. Long cables feed power and instructions to the submersible and retrieve images and other data. These vehicles usually are equipped with video cameras to allow researchers to see what the vehicle “sees” in real time. They often possess robotic arms to collect artifacts, rocks and biological samples.

“The deep ocean is a cold, dark, high-pressure, inhospitable environment, and this equipment must be able to operate reliably under these conditions,” Whitcomb says. “Inhabited deep submersibles, such as the U.S. Deep Submergence Vehicle Alvin, remain the only way for humans to directly observe the benthic floor with their own eyes. Deep-diving submarines are ideal for many tasks, yet they have limited endurance. One advantage of an uninhabited submersible is that it can explore the deepest parts of the ocean 24 hours a day, seven days a week, under the remote control of science teams that are working around the clock aboard the mother ship.”

Operating a robotic vehicle from a great distance poses certain challenges, however, and that’s where Whitcomb’s team comes in. “Our lab focuses on two key problems that occur in the design of remotely operated undersea vehicles: navigation and control,” Whitcomb says. “One of the most difficult things about maneuvering an underwater vehicle is that you need to know where it is. What, precisely, is its position and orientation on our planet? To determine these things, we’ve developed a computer system that integrates signals from a dozen on-board sensors to compute the submersible’s position and velocity.”

Based on this information, an operator on the surface can use a joystick to move the undersea robot in three dimensions. The control system developed by Whitcomb and his students also allows an operator to tell a computer precisely where the vehicle should be located; the software then automatically moves the vehicle to that point. At the new Johns Hopkins hydrodynamics lab, researchers are fine tuning this system by sending commands over a tether line to six electric thrusters mounted upon the test submersible.

At sea, researchers on the surface can use this same system to carefully control a larger underwater robot’s movements, instructing the vehicle to move in a precise grid pattern. This allows the sub to collect the images and sonar data needed to produce photographic and topographic maps of sections of the ocean’s floor that contain interesting geological, biological or archaeological features. Whitcomb says his computer system also can direct a submersible to hover just 6 to 12 inches above the ocean floor, close enough to collect samples without disturbing ecologically sensitive surfaces. “With this system,” he says, “we can control a vehicle’s position to within a few centimeters and its heading to within a degree.”

Whitcomb supervises underwater robotics research at Johns Hopkins as director of the Dynamical Systems and Control Laboratory. The JHU Remotely Operated Vehicle was designed and built by one of his doctoral students, David Smallwood. Another of Whitcomb’s doctoral students, James Kinsey, is refining the underwater navigation system at the new testing tank. Other Johns Hopkins marine and oceanographic researchers will have access to the new tank. Funds for construction of the tank and related research were provided by the National Science Foundation.