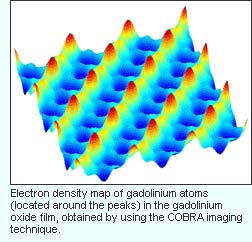 Scientists have developed and tested a new imaging technique that reveals the atomic structure of thin films with unprecedented resolution. For the first time, the technique has shown very precisely how the atoms of the first layers of a film rearrange under the action of the substrate on which the film is grown. The results of the study are reported as the cover story of the October issue of Nature Materials.

“This technique directly provides a very precise image of atomic positions within a film and at the interface between a film and a substrate,” says Ron Pindak, a physicist at the National Synchrotron Light Source (NSLS) at the U.S. Department of Energy’s Brookhaven National Laboratory and one of the authors of the study. “With the current growing interest in the study of nanomaterials, which are the size of a few atoms, this technique will probably be key in devising such materials and understanding their properties.”

Thin films are currently used in many technologies, including electronic chips, coatings, and magnetic recording heads. To improve the properties of these materials and create even thinner structures – such as smaller electronic chips – scientists are now trying to understand how the films interact with the substrate on which they are grown.

“When you build a film on a substrate, the positions of the atoms of the film are slightly shifted, and some of these shifts can be very small,” says Roy Clarke, a physicist at the University of Michigan in Ann Arbor and another author of the study. “So it is important to be able to explain how these films behave at the atomic level.”

By building upon traditional x-ray diffraction, the newly devised technique provides such information. In this technique, x-rays are projected onto the film and the substrate pattern, which is then used to determine the positions of the atoms inside the film. The diffraction pattern of thin films is composed of ridge-like features called “Bragg rods,” hence the name of the technique: coherent Bragg rod analysis (COBRA).

“Key to the COBRA technique is a new approach to determining the phase of the diffracted x-ray waves,” says Yizhak Yacoby, physicist at the Hebrew University in Jerusalem and lead author of the study. “Unlike traditional x-ray diffraction techniques, COBRA does not rely on a priori guesses about the structure of the film and the substrate, and we do not need to prepare the sample in a special way – as with a transmission electron microscope.”

Yacoby, who started developing the technique four years ago, first applied it to known structures by using x-rays produced at the NSLS at Brookhaven, which allowed him to refine the technique. In their recent study, Yacoby and his collaborators applied the technique to a film made of gadolinium oxide grown on a gallium arsenide substrate using brighter x-rays at the Advanced Photon Source (APS) at Argonne National Laboratory in Illinois. Key to the successful data collection were two APS beam lines that Clarke and Edward Stern, a physicist at the University of Washington in Seattle, perfected for the past five years.

The scientists now intend to investigate the properties of various other films. Yacoby, who has already submitted patents for the COBRA technique, is confident that it will have many applications in the design of electronic devices based on thin films, the self-assembly of layers made of metal oxides used in catalysis, and the study of films made of large organic molecules, such as proteins.

This work was funded by the U.S. Department of Energy, which supports basic research in a variety of scientific fields.