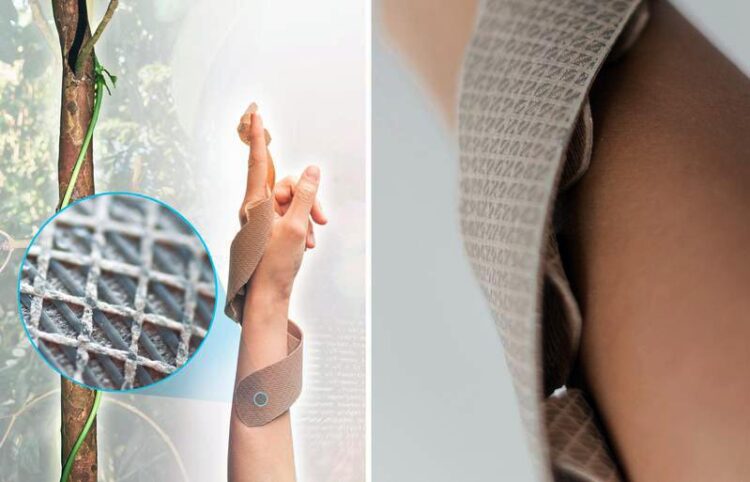 With their new process, the research team has produced its first prototype, a forearm brace which adapts to the wearer and can be developed for medical applications.
Tiffany Cheng / ICD Universität Stuttgart

Researchers at the University of Freiburg and the University of Stuttgart have developed a new process for producing movable, self-adjusting materials systems with standard 3D-printers. These systems can undergo complex shape changes, contracting and expanding under the influence of moisture in a pre-programmed manner. The scientists modeled their development based on the movement mechanisms of the climbing plant known as the air potato (Dioscorea bulbifera). With their new method, the team has produced its first prototype: a forearm brace that adapts to the wearer and which can be further developed for medical applications.

This process has been collaboratively developed by Tiffany Cheng and Prof. Dr. Achim Menges from the Institute of Computational Design and Construction (ICD) and the Integrative Computational Design and Construction for Architecture Cluster of Excellence (IntCDC) at the University of Stuttgart, together with Prof. Dr. Thomas Speck from the Plant Biomechanics Group and the Living, Adaptive and Energy-autonomous Materials Systems Cluster of Excellence (livMatS) at the University of Freiburg. The researchers are presenting their results in the journal Advanced Science.

3D-printing has established itself as a manufacturing process for a wide range of applications. It can even be used to produce intelligent materials and material systems that remain in motion after printing, autonomously changing shape from external stimuli such as light, temperature or moisture. This so-called ‘4D-printing’, in which predetermined shape changes can be triggered by a stimulus, immensely expands the potential applications of material systems. These changes in shape are made possible by the chemical composition of the materials, which consist of stimuli-responsive polymers. However, the printers and base materials used to produce such materials systems are usually highly specialized, custom-made and expensive – until now.

Now, using standard 3D-printers, it is possible to produce materials systems that react to changes in moisture. Given their structure, these materials systems can undergo shape changes in the entire system or simply in the individual parts. The researchers at the Universities of Freiburg and Stuttgart combined multiple swelling and stabilizing layers to realize a complex movement mechanism: a coiling structure that pulls tighter by unfolding ‘pockets’ as pressors and which can loosen up again on its own when the ‘pockets’ release and the coiled structure returns to the open state.

For this new process, the scientists used a mechanism from nature: the air potato climbs trees by applying pressure to the trunk of the host plant. To do this, the plant first winds loosely around a tree trunk. Then it sprouts ‘stipules’, basal outgrowths of the leaves, which increase the space between the winding stem and the host plant. This creates tension in the winding stem of the air potato. To imitate these mechanisms, the researchers constructed a modular material system by structuring its layers so that it can bend in different directions and to different degrees, thereby coiling and forming a helix structure. ‘Pockets’ on the surface cause the helix to be pushed outwards and put under tension, causing the entire material system to contract.

“So far, our process is still limited to existing base materials that respond to moisture,” says Achim Menges. “We’re hoping,” Thomas Speck adds, “that in the future, inexpensive materials that also respond to other stimuli will become available for 3D-printing and can be used with our process.”

Researchers at the University of Freiburg’s Living, Adaptive and Energy-autonomous Materials Systems Cluster of Excellence (livMatS) are developing life-like materials systems that are inspired by nature. Like living structures they adapt autonomously to different environmental factors, generate clean energy from their environment and are impervious to damage or can heal themselves. Nevertheless these materials systems will be purely technical objects, so they can be produced using synthetic methods and deployed in extreme conditions. Thomas Speck is a member of the team of speakers at the Cluster of Excellence.

livMatS Cluster of Excellence at the University of Freiburg
https://livmats.uni-freiburg.de/en

IntCDC Cluster of Excellence at the University of Stuttgart
https://www.intcdc.uni-stuttgart.de