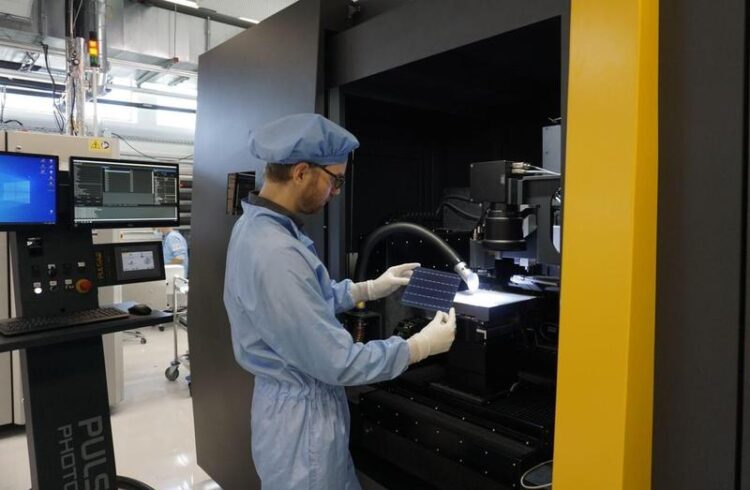 Fully automated roll-to-roll laser transfer and firing system at Fraunhofer ISE. The system was developed within the collaborative project “C3PO”, which was financed by the Federal Ministry for Economic Affairs and Energy. © Fraunhofer ISE

The Fraunhofer Institute for Solar Energy Systems ISE has developed an alternative process for producing solar cell contacts. The laser transfer and firing (LTF) technique offers several advantages compared to conventional processes, particularly for specific solar cell surfaces. Together with industry partners in the joint project “C3PO”, the Fraunhofer researchers in Freiburg have realized a fully automated LTF process for the first time on a system from Pulsar Photonics GmbH. Now the process can be systematically tested and optimized with the goal of industrial implementation. f-cell conference in Stuttgart on September 29.

Contact fingers, conductive lines made of metal, are applied to the solar cell surface to transport the generated solar cell current out of the cell. The standard process for producing the contact fingers is screen printing, in which silver paste is applied through a sieve onto the front side of the solar cell.

Since solar cell production is one of the largest consumers of silver worldwide, there is great interest to find alternative metals and other procedures for applying metal contacts. One of these is a process called electrochemical plating. As a rule, solar cells are encased in an electrically insulating coating that has to be opened to make the contact fingers.

For conventional plating processes, a laser is normally used to open up the coating. The contact fingers are electrochemically grown at these openings using first nickel, then copper and lastly silver.

Using the laser transfer and firing (LTF) process to open the insulating layer and create the metal contact fingers has several advantages over the standard method. For one, it allows greater flexibility in the choice of contact metals: allowing aluminum, titanium, or bismuth to be used instead of nickel, for example. Compared to screen printing, the LTF process enables more flexibility in the layout of the contact fingers. The metallization process is also suitable for solar cells with temperature-sensitive layers, as it does not heat the solar cell above room temperature.

The LTF process consists of two steps: In the first step, a direct laser printing process is used to transfer metal in the desired contact finger layout from a metal-coated foil to a solar cell. At this point, the process is initially referred to as LIFT (Laser Induced Forward Transfer). It is essential that the transferred metal structures are very narrow so that the cell area is not excessively shadowed. “In the laboratory, we were able to apply metal lines of less than 5 µm width to the solar cell,” reports Dr. Saskia Kühnhold-Pospischil, project manager at Fraunhofer ISE. For the LIFT process in the new system, the solar cell is placed on a vacuum chuck and is moved under a metal-coated foil from which the metal is transferred to the solar cell. After the metal transfer, the metal foil is transported fully automatically through a roll-to-roll system for the metal transfer of the next solar cell. The coated films used in the LIFT process were developed especially for this purpose by the ROWO company.

In the second process step, the metal structures from the first step are formed into contacts using a laser selective heating (LSH) process. A laser from the Soliton / Advalue company is used. The wavelength of the laser beam is absorbed by the metal but not by the underlying silicon. As a result, the laser does not damage the silicon material in this process, which is advantageous for high solar cell efficiencies. Both process steps can be fully automated and are carried out in the new LTF system aligned to within a few micrometers.

The functionality of the LTF process had been proven previously in the laboratory. Now it has been carried out for the first time on an industry-scale system as a collaborative effort between the project partners PULSAR, Soliton, RENA, ROWO and Fraunhofer ISE within the joint project “C3PO” (“Cool Copper Contacts – Development of an industrial low-temperature technology to manufacture 20µm copper contacts for bifacial PERC, hetero and TOPCon solar cells”), which was funded by the Federal Ministry for Economic Affairs and Energy BMWi. In future, in addition to the LTF application described above, contact fingers are also to be manufactured in their entirety layer by layer, thus additively.“ In addition to the manufacture of minuscule 3D structures and the localized coating of sensitive components, we see possible applications for the LTF technology in a variety of other research fields. With the pilot system and our consortium of experts, we hold the best prerequisites to successfully develop these in the future,” says Jan Nekarda, department head of Structuring and Metallization at Fraunhofer ISE.

Pulsar Photonics GmbH is an innovative high-tech company in the field of laser technology. The range of services includes development and production of laser machines for material processing with short and ultra-short pulsed lasers. Further business areas include serial micro manufacturing and the development of complex beam shaping systems for multi-beam and precision processing. The machines are adapted to the meet the requirements of the process and the customer. This includes the components contained and the individualized software solutions. Pulsar Photonics GmbH, founded in 2013, is one of the 1000 fastest growing companies in Europe according to Financial Times and Statista.

One focus of ROWO is the development of customized coating systems on flexible substrates such as foils, non-woven and woven fabrics. The demands on the coatings are so diverse that, in addition to conventional vapor deposition technology, plasma-supported processes such as sputter technology are also used. Furthermore, ROWO also deals with the processing steps following the coating. Special attention is given to innovative structuring processes for material development and optimization for the PCB and cable industries and EMC applications.
https://www.rowo-coating.com/

RENA Technologies GmbH has many years of experience in process and equipment development for crystalline silicon solar cells, particularly in the area of wet chemical processes and electroplated copper deposition.