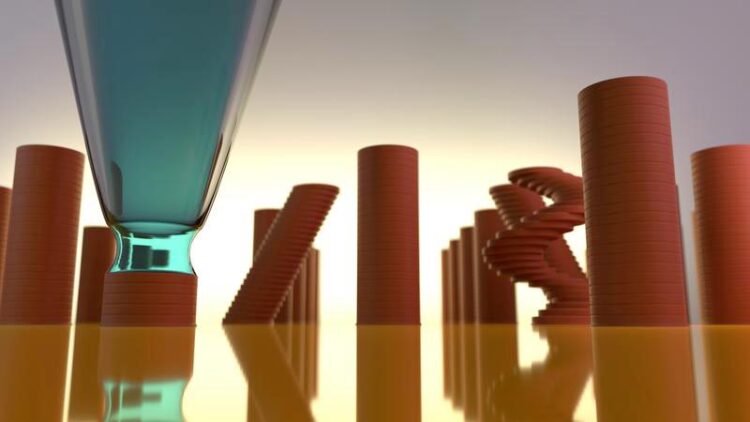 The new 3D printing technology can be used to produce a wide variety of extremely small metal objects. A solution of positively charged copper ions emerges from the tip of a tiny pipette through a print nozzle. When the liquid comes into contact with the negatively charged electrode, the metal ions combine with the electrons in the electrode to form neutral metal atoms which are then deposited on the electrode and gradually form a solid metal layer. To prevent the print nozzle from getting clogged, the nozzle approaches the negative electrode only for a very short time and is retracted as soon as the metal layer had exceeded a certain thickness. The team developed a technique for monitoring this process automatically.
Credit: Julian Hengsteler, ETH Zürich

In recent years 3D printing, also known as additive manufacturing, has established itself as a promising new manufacturing process for a wide variety of components. Dr Dmitry Momotenko, a chemist at the University of Oldenburg, has now succeeded in fabricating ultrasmall metal objects using a new 3D printing technique.  In a paper published together with a team of researchers from ETH Zurich (Switzerland) and Nanyang Technological University (Singapore) in the scientific journal Nano Letters, he reports that the technique has potential applications in microelectronics, sensor technology and battery technology. The team has developed an electrochemical technique that can be used to make objects out of copper just 25 billionths of a metre (equivalent to 25 nanometres) in diameter. For comparison, a human hair is about 3000 times thicker than the filigree nanostructures.

The new printing technique is based on the comparatively simple and well-known process of electroplating. In electroplating, positively charged metal ions are suspended in a solution. When the liquid comes into contact with a negatively charged electrode, the metal ions combine with the electrons in the electrode to form neutral metal atoms which are then deposited on the electrode and gradually form a solid metal layer. “In this process, a solid metal is fabricated from a liquid salt solution ­– a process that we electrochemists can control very effectively,” says Momotenko. For his nanoprinting technique he uses a solution of positively charged copper ions in a tiny pipette. The liquid emerges from the tip of the pipette through a print nozzle. In the team’s experiments the nozzle opening had a diameter of between 253 and 1.6 nanometres. Only two copper ions can pass through such a tiny opening simultaneously.

Monitoring the progress of the printing process

The biggest challenge for the scientists was that as the metal layer grows, the opening of the print nozzle tends to get clogged. To prevent this the team developed a technique for monitoring the progress of the printing process. They recorded the electrical current between the negatively charged substrate electrode and a positive electrode inside the pipette and then the movement of the nozzle was adjusted accordingly in a fully automated process: the nozzle approached the negative electrode for a very short time and then retracted as soon as the metal layer had exceeded a certain thickness. Using this technique, the researchers gradually applied one copper layer after another to the electrode’s surface. Thanks to the extremely precise positioning of the nozzle they were able to print both vertical columns and inclined or spiral nanostructures, and even managed to produce horizontal structures by simply changing the printing direction.

They were also able to control the diameter of the structures very precisely – firstly through the choice of print nozzle size and secondly during the actual printing process on the basis of electrochemical parameters. According to the team, the smallest possible objects that can be printed using this method have a diameter of about 25 nanometres, which is equivalent to 195 copper atoms in a row.

That means that with the new electrochemical technique it is possible to print far smaller metal objects than have ever been printed before. 3D printing using metal powders, for example – a typical method for 3D printing of metals – can currently achieve a resolution of about 100 micrometres. The smallest objects that can be produced using this method are therefore 4,000 times larger than those in the current study. Although even smaller structures can be produced using other techniques, the choice of potential materials is limited. “The technology we are working on combines both worlds – metal printing and nanoscale precision,” says Momotenko. Just as 3D printing has sparked a revolution in the production of complex larger components, additive manufacturing at the micro- and nanoscales could make it possible to fabricate functional structures and even devices with ultrasmall dimensions, he explains.

“3D-printed catalysts with high surface area and special geometry to allow particular reactivity could be prepared for the production of complex chemicals,” says Momotenko. Three-dimensional electrodes could make electrical energy storage more efficient, he adds. The chemist and his team are currently working towards this very goal: in their NANO-3D-LION project they aim to drastically increase the surface area of electrodes and reduce distances between the cathode and the anode in lithium-ion batteries through 3D printing, in order to speed up the charging process. The project has been funded by a European Research Council Starting Grant since March 2021.

Quantum materials cut closer than ever