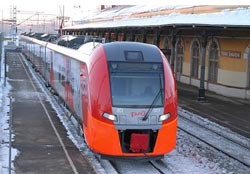 It is at this facility that a total of 1,200 cars for the “Lastochka” (Rus-sian for “Little Swallow”) trains to be operated by Russian Rail-ways (RZD) are to be manufactured.

The associated order, worth some 2 billion euros, was won by Siemens and its partner Sinara in 2011. In the presence of Vadim Morozov, First Vice President of RZD, and Dmitry Pumpyansky, President of the Sinara Group, Roland Busch, of Siemens AG's Managing Board, pressed the button to start the first welded seam on the bodywork.

This is the first welding of aluminum body in the history of the Russian railway engineering.

“This marks a further chapter in the success story of Siemens Rail Systems in Russia. After not only achieving early licensing for the Desiro RUS trains together with RZD, but also putting them into passenger-carrying service around six months ahead of schedule, today sees us commence production of the further Lastochka cars on time.

We are thus sending out a clear signal of our ambitious goals for the Russian market. With our works in Yekaterinburg, we are ideally set up for production of locomotives and regional train sets alike,” said Jochen Eickholt, CEO of Siemens Rail Systems.

Russia has the world's second-largest rail network, handling 1.3 billion tonnes of freight per year. RZD intends to invest heavily in the nation's rail infrastructure over the coming decades. In terms of regional trains sets alone, around 24,000 cars are set to be replaced or acquired by the year 2030.

The first Krefeld-built trains have been operating on Russian tracks since January 2013. The Lastochkas will link Saint Petersburg with Veliky Novgorod and Bologoye, via Chudovo. Scheduled services from Moscow to Nizhny Novgorod, in Sochi and in Kazan region were likewise commenced earlier than planned.