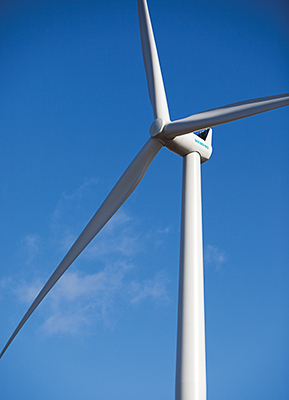 Advanced technology and tailor made service for Kniphagen: Siemens Energy will deliver wind turbines of the type SWT-3.0-113 and help insure the long-term reliability and performance for 20 years.

Siemens Energy will deliver five wind turbines for the onshore wind power plant Kniphagen in the north German region Ostholstein. The operator has chosen Siemens modern direct driven wind turbines for the wind power plant, located close to the coast on the Baltic Sea. A 20-year service and maintenance agreement was also signed to help insure the long-term reliability and optimum performance of the turbines.

Siemens will install five SWT-3.0-113 turbines at the 15 megawatt project in the region of Ostholstein. At the site in Kniphagen the turbines form a modern onshore wind power plant that is scheduled to be connected to grid in 2014. In planning this project, the Siemens team focused on reducing the necessary digging to a minimum. Due to anticipatory planning of paths and utility spaces for the cranes the sealing of grassed areas in the nature embedded site remained notably small. It is the first time, Siemens direct drive turbines are installed in this region.

Peter Spies, CEO of Windpark Kniphagen GmbH & Co. KG, is convinced of the benefits of Siemens direct drive technology. The gearless wind turbines reduce the number of moving parts by 50 percent. “The leading aspects in the choice of our wind turbines were optimum availability and maximum energy efficiency,” underlines Spies. Within the framework of a 20-year service contract Siemens and its wind service team will maintain the wind turbines helping to insure they continue to deliver reliable clean energy for the long term.

“Projects such as Kniphagen are proof that our modern direct drive wind turbines can be the first choice not only for large onshore wind projects, but also for smaller projects,” says Markus Tacke, CEO of Siemens Wind Power. “We are pleased that customers with both larger and smaller wind farms are continuing to recognize the benefits of our advanced technology and customized service solutions.”

Wind power and energy service are part of Siemens' Environmental Portfolio. Around 43 percent of its total revenue stems from green products and solutions. That makes Siemens one of the world's leading providers of eco-friendly technology.

The Siemens Energy Sector is the world's leading supplier of a broad spectrum of products, services and solutions for power generation in thermal power plants and using renewables, power transmission in grids and for the extraction, processing and transport of oil and gas. In fiscal 2013 (ended September 30), the Energy Sector had revenues of EUR26.6 billion and received new orders totaling approximately EUR28.8 billion and posted a profit of approximately EUR2 billion. On September 30, 2013, the Energy Sector had a work force of approximately 83,500. Further information is available at: http://www.siemens.com/energy