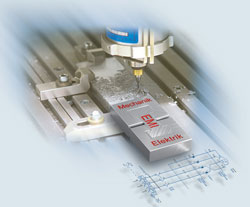 EPLAN Mechatronic Integration links the design data from mechanical and automation engineering so that the data can then be used by both departments.

Mechatronic Integration technology is playing an increasingly important role in popularizing the concept of end-to-end, cross-functional design. EPLAN will be presenting two new Mechatronic Integration software modules at the Hanover Trade Fair: “Piping” for optimized planning of hoses and pipes, and “Collaboration” for cross-functional handling of components. Last year “Cabling,” EPLAN’s first mechatronic module launch, was an important step towards virtual prototyping in machine design. “Piping” and “Collaboration” promise to be just as significant.

With Mechatronic Integration modules, two engineering departments share program access and intelligence, and become more productive as a consequence. Design work proceeds more quickly, with faster project turnarounds. EPLAN Mechatronic Integration doesn’t just create an IT link between two departments – it also allows both of their systems to share a common database. For example, an engineer in the electrical engineering department can work off of the same 3D model that the mechanical design team has created with Autodesk Inventor®. Access to the 3D model is limited to those features that the electrical engineer needs to perform his or her tasks with. The user can navigate within the model and the mechanical structure tree, but cannot modify the mechanical form. Using the EPLAN “Cabling” module, an electrical engineer can render all the cable requirements for machinery based on the mechanical design rather than wait for the production of a prototype.

The ability to reference back to the mechanical 3D model and engage in a bidirectional exchange of data with the mechanical design team can deliver compelling benefits for other areas of design. The mechanical and plant engineering sectors are using mechatronic components so their systems can operate as a single, functional unit that also includes control technology, now often referred to as decentralized intelligence.

The “Piping” module, being presented in beta version at Hanover, allows the fluid engineer to configure pipes and hoses more easily and quickly with the mechanical engineers. The full cost and productivity benefits of cross-functional design are easy to capture and quantify in pneumatics and hydraulics because the length or the line arrangement can be defined in the software without building a prototype. The lengths can then be called up in EPLAN Fluid and the lines assembled for production as ordered.

“Collaboration” links functions at the component level. Its benefits are more subtle than “Piping” but no less significant. The mechanical designer creates a basket in his system that project planners can access when selecting components. That creates a match at the most basic level. The “Collaboration” module will identify any discrepancies and trigger a report, so that errors and inconsistencies are avoided. There is a further advantage for those running a PDM system where the CAD/CAE tools are linked to commercial systems like a PPS program running on the PDM system. Where an electric motor design is stored as a mechanical 3D model, the module makes it possible to mark components in the meta data for their relevance from a mechatronic standpoint. When the 3D view is copied from the PDM system to the mechanical drawing, the motor is automatically recognized as a mechatronic component, permitting end-to-end data flow without media or system breaks.

Getting a jump on tomorrow

User interest in EPLAN Mechatronic Integration and this union of M-CAD and automation engineering is enormous, and the benefits are substantial. Many companies, however, lack the organizational setup for implementing comprehensive end-to-end design. They have to ease into it. That’s why EPLAN’s three Mechatronic Integration modules are leading indicators about the future of mechatronic design: anyone who commits to embracing cross-functionality in mechanical and plant engineering at this early stage can look forward to even greater benefits over time.

EPLAN Software & Service is a software provider for global engineering solutions. All advanced development work centers around efficient workflows and process support. Customers benefit from effective support through a broad range of services, including training, consulting and customer solutions. With some 18,000 customers and 60,000 installations worldwide, this German-based company has been demonstrating the success of its consistent practical orientation and international presence for more than 20 years. As a Rittal subsidiary and part of the Friedhelm Loh Group, the name EPLAN Software & Service has become synonymous with durability and investment security.