Home / Power and Electrical Engineering / What happens in a solar cell when the lights go out?
25.07.2018

What happens in a solar cell when the lights go out? 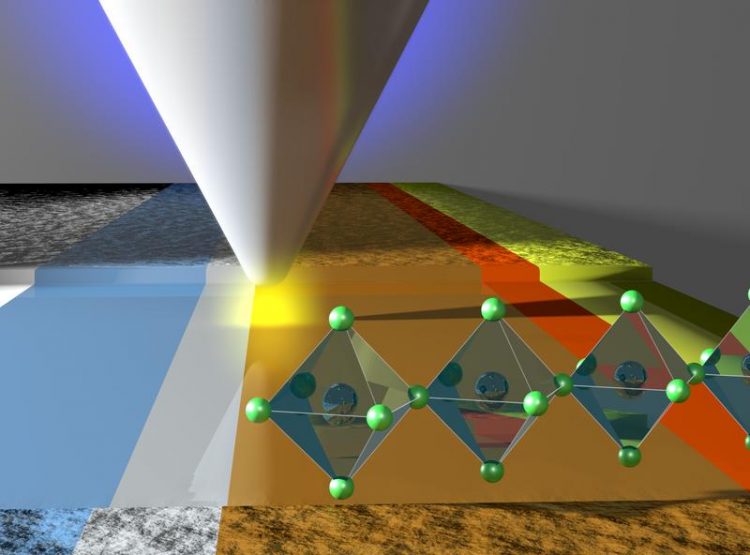 Artistic representation of the layer structure in a perovskite solar cell. With a tip above the surface, the voltage in the cell can be measured. © MPI-P

Perovskite solar cells are currently electrifying the solar cell community. This new, cheap, and easy-to-process material has almost ideal physical properties for converting light into electricity: as it is pitch-black, a very thin layer of less than a thousandth of a millimeter is sufficient to absorb all incident sunlight.

At the same time, it is a very good electrical conductor, enabling a fast and efficient transfer of the generated electrical charges to the contacts and connected devices. With an efficiency of 22.7% in the conversion of light energy into electrical energy, perovskite solar cells can already outperform the best multicrystalline silicon solar cells (22.3%).

However, in order to further increase efficiency and make perovskite solar cells fit for commercialization, it is very important for researchers to understand all the processes that occur in the solar cell during operation.

Together with researchers from the École polytechnique fédérale de Lausanne, Switzerland, the groups headed by Jun.-Prof. Dr. Stefan Weber and group leader Dr. Rüdiger Berger in the department of Prof. Butt at the Max Planck Institute for Polymer Research in Mainz, Germany, have shed light on the processes in perovskite solar cells after switching the light.

To do so, the researchers have deliberately broken solar cells in the middle and polished a tiny area on the cross-section of the cell, only a few millionths of a meter wide. In an atomic force microscope, they then positioned a thin metal tip over the polished cross-sectional area. At its end, this metal tip is only about 10 nanometers wide – more than ten thousand times thinner than a human hair.

Using a method known as Kelvin probe force microscopy, the researchers were able to measure the electrical voltage on the polished cross-sectional area just below the tip. A modification of this technique allowed them to measure voltage profiles across the individual layers of the solar cell with high spatial and high temporal resolution.

The voltage profile across the solar cell is of particular interest, because it affects the separation of the electrical charges generated by the incident light. Due to electrostatic forces, positive charges migrate to the negative pole and negative charges to the positive pole of the voltage. On the illuminated cross-sectional surface of the solar cell, the scientists from Mainz discovered an accumulation of charges at the edge of the perovskite layer.

This charge accumulation was stable for a short moment after the light was switched off. “These charges at the perovskite interfaces play the main role in hysteresis because they maintain an electric field in the cell for about half a second after the light is turned off,” explains Stefan Weber.

“This means that hysteresis can be influenced or completely suppressed by modifications at these interfaces.” This is an important step in the development of perovskite solar cells. The researchers recently published their findings in the prestigious journal Energy Environmental Science.

About Jun.-Prof. Dr. Stefan Weber
Stefan Weber (born 1981) studied physics at the University of Konstanz. For his PhD thesis, he joined the Max Planck Institute for Polymer Research in 2007, where he studied organic electronic materials with atomic force microscopy in an international German-Korean research-training group. He then went to University College Dublin, where he studied high-resolution force microscopy at liquid-solid interfaces. Since 2012 he has been group leader at the MPI-P and, since 2014, a junior professor in the physics department of the Johannes Gutenberg University Mainz. Since his doctoral thesis, he has been working on the application and further development of force microscopy methods. He aims at understanding basic mechanisms in nanostructures as found e.g. in solar cell materials.

Max Planck Institute for Polymer Research
The Max Planck Institute for Polymer Research (MPI-P) ranks among the globally leading research centers in the field of polymer research since its foundation in 1984. The focus on soft materials and macromolecular materials has resulted in the worldwide unique position of the MPI-P and its research focus. Fundamental polymers research on both production and characterization as well as analysis of physical and chemical properties are conducted by scientific collaborators from all over the world. Presently over 500 people are working at the MPI-P, the vast majority of whom are engaged in scientific research.