Home / Power and Electrical Engineering / Studying how unconventional metals behave, with an eye on high-temperature superconductors
13.12.2018

Studying how unconventional metals behave, with an eye on high-temperature superconductors 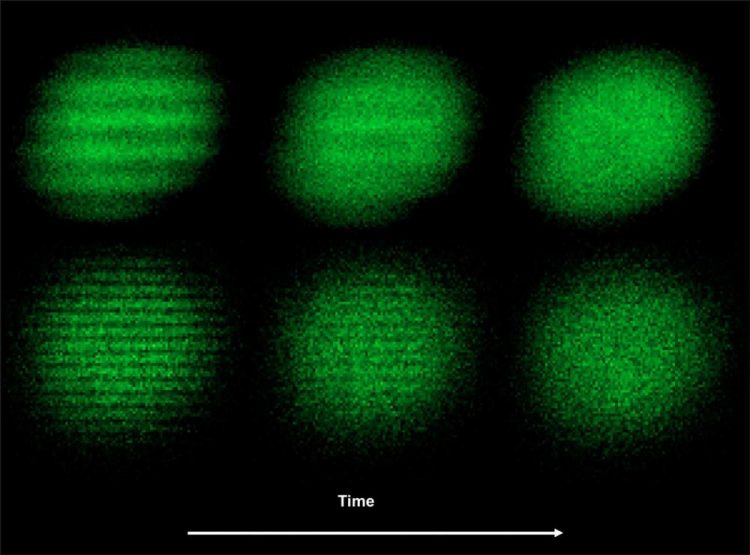 To explore what happens when electrical resistance develops in unconventional metals, researchers led by Princeton University physicists sent a density wave through a gas of ultracold atoms (top left). The researchers observed the dissipation of the density wave over time, which is analogous to what happens in metals when resistance slows the flow of electricity. They found that the atoms exhibited behaviors of so-called "bad" and "strange" metals, findings that may help researchers understand high temperature superconductivity. The bottom row shows the same experiment using a finer ripple. Credit: Peter Brown and Waseem Bakr, Princeton University

The results may help explain how certain types of superconductors made from copper oxides are able to conduct electricity so efficiently. The research was published online Dec. 6 in the journal Science.

Superconducting materials are ones that efficiently transmit electricity without losing any of the current as heat. Because they don't waste electricity, they have the potential to boost the energy-efficiency of the electrical power grid. They may also open up possibilities for new technologies.

“If you want to carry electricity in power lines more efficiently, then improving our fundamental understanding of transport in these materials will have a significant impact on our ability to design better materials,” said Waseem Bakr, assistant professor of physics and senior author on the study.

Copper oxide superconductors are prized for their ability to work at relatively high temperatures compared to other types of superconductors. The materials were the subject of the Nobel Prize in Physics in 1987.

To explore how resistance develops, the researchers created an experiment that involved trapping atoms in an evenly spaced grid made from intersecting laser beams. The resulting structure, called an optical lattice, holds the atoms like eggs in an egg carton or checkers on a checkerboard.

This setup allows researchers to see what is happening between the atoms. Normally this is not possible because the atoms in a solid are tightly packed.

In this experiment, the atoms are about 10,000 times farther from each other than the atoms in a typical material, which allows researchers to view them using a microscope.

The tiny particles are kept at intensely cold temperatures — just a few billionths of a degree above absolute zero — to quell their normal jumpiness.

The researchers used the atoms as a stand-in for electrons, the charged particles that carry electrical current. Atoms are easier to image and manipulate than electrons.

“Our lithium atoms in an optical lattice obey the same physics as electrons in real materials,” said Peter Brown, a graduate student in physics and first author on the study. “This is advantageous because we have greater control over our system than is possible using real materials — for example, we can tune the interactions between atoms and change the density of atoms.”

To explore how resistance develops, the researchers projected a laser beam onto the atoms in the lattice, creating ripples of density that travel through the atoms. The team measured how quickly the waves died away, which happens because the atoms bump against each other and become out of sync.

This unexpected linear response to temperature is one that is seen in the copper-oxide, or “cuprate,” superconductors. This behavior has earned these materials the name “strange metals,” and some researchers think that understanding this behavior might shed light on the origin of high-temperature superconductivity.

Another observation the team made is that at high temperatures the resistance exceeds what theorists predicted was possible in those systems. The explanation for this is that the atoms are no longer behaving as discrete particles but rather as a quantum soup where each particle no longer has its own identity. This state happens when a system exceeds a theoretical bound called the Mott-Ioffe-Regel (MIR) limit. Physicists call such materials “bad metals.”

This state is interesting because resistance is thought to develop when particles scatter, bouncing off nearby particles like pinballs in a machine. Surpassing the MIR bound implies that the particles do not follow this simple picture.

“Common sense says that a particle cannot scatter until it bounces off another particle. But what we saw was that resistivity keeps increasing and doesn't respect this bound,” Bakr said.

David Huse, Princeton's Cyrus Fogg Brackett Professor of Physics and a theorist who specializes in the physics of interacting quantum matter, provided theoretical understanding for the experimental observations. In addition to Huse, Brown and Bakr, the team at Princeton included graduate students Debayan Mitra and Elmer Guardado-Sanchez, and Dicke Postdoctoral Fellow Peter Schauss.

The team collaborated with Reza Nourafkan, Alexis Reymbaut, Charles-David Hebert, Simon Bergeron and Andre-Marie Tremblay at the University of Sherbrooke in Canada; and Jure Kokalj at the Jozef Stefan Institute in Ljubljana, Slovenia.

Related work exploring the spin-conductivity of cold atoms in an optical lattice was performed in the group led by Professor Martin Zwierlein at the Massachusetts Institute of Technology and was published in the same issue of Science.

The work at Princeton was supported by the National Science Foundation, the U.S. Air Force Office of Science Research Young Investigator Research Program, the U.S. Department of Defense, the David and Lucile Packard Foundation, and the Alfred P. Sloan Foundation fellowship.