Smaller than a coin 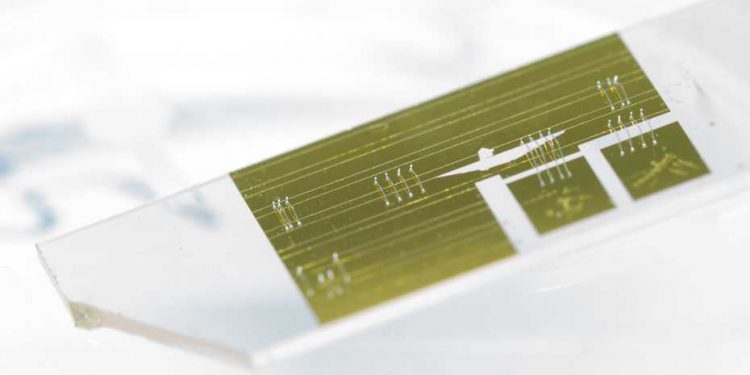 Approximately 2 cm in length, this chip makes it possible to precisely analyse the infrared spectrum. Credit: ETH Zurich / Pascal A. Halder Usage Restrictions: The rights to the images always remain with the person referred to as the copyright holder for them. Images published on ETH News may be used by other media and online portals only if ETH Zurich is specifically mentioned as the copyright holder and only in connection with the relevant ETH News article. Further distribution of images - for example, via download links - is permitted only with the approval of the editorial team.

At first glance, the idea of using mobile phones for chemical analyses seems a daring one. After all, the infrared spectrometers used for such analyses today generally weigh several kilograms and are difficult to integrate into a handheld device. Now researchers at ETH Zurich have taken an important step towards turning this vision into reality.

David Pohl and Marc Reig Escale?, in the group headed by Rachel Grange, Professor of Optical Nanomaterials in the Department of Physics, collaborated with other colleagues to develop a chip about 2 square centimeters in size. With it, they can analyse infrared light in the same way as they would with a conventional spectrometer.

Waveguides instead of mirrors

A conventional spectrometer splits the incident light into two paths before reflecting it off two mirrors. The reflected light beams are recombined and measured with a photodetector. Moving one of the mirrors creates an interference pattern, which can be used to determine the proportion of different wavelengths in the incoming signal. Because chemical substances create characteristic gaps in the infrared spectrum, scientists can use the resulting patterns to identify what substances occur in the test sample and in what concentration.

This same principle is behind the mini-spectrometer developed by the ETH researchers. However, in their device, the incident light is no longer analysed with the help of moveable mirrors; instead, it makes use of special waveguides with an optical refractive index that can be adjusted externally via an electric field. “Varying the refractive index has an effect similar to what happens when we move the mirrors,” Pohl explains, “so this set-up lets us disperse the spectrum of the incident light in the same way.”

Depending on how the waveguide is configured, researchers can examine different parts of the light spectrum. “In theory, our spectrometer lets you measure not only infrared light, but also visible light, provided the waveguide is properly configured,” Escalé says. In contrast to other integrated spectrometers that can cover only a narrow range of the light spectrum, the device developed by Grange's group has a major advantage in that it can easily analyse a broad section of the spectrum.

Alongside its compact size, the ETH physicists' innovation offers two other advantages: the “spectrometer on a chip” has to be calibrated only once, compared to conventional devices that needs recalibration over and over again; and because it contains no moving parts, it requires less maintenance.

For their spectrometer, the ETH researchers employed a material that is also used as a modulator in the telecommunications industry. This material has many positive properties, but as a waveguide, it confines the light to the inside. This is less than ideal, as a measurement is possible only if some of the guided light can get out. For this reason, the scientists attached delicate metal structures to the waveguides that scatter the light to the outside of the device. “It required a lot of work in the clean room until we could structure the material the way we wanted,” Grange explains.

Until the current mini-spectrometer can actually be integrated into a mobile or other electronic device, however, there is still some technological progress to be made. “At the moment we're measuring the signal with an external camera,” Grange says, “so if we want to have a compact device, we have to integrate this as well.”

Originally the physicists were aiming, not at chemical analyses, but at a completely different application: in astronomy, infrared spectrometers provide valuable information about distant celestial objects. Because the earth's atmosphere absorbs a high amount of infrared light, it would be ideal to station these instruments on satellites or telescope in space. A compact, lightweight and stable measurement device that can be launched into space relatively inexpensively would naturally offer a substantial benefit.