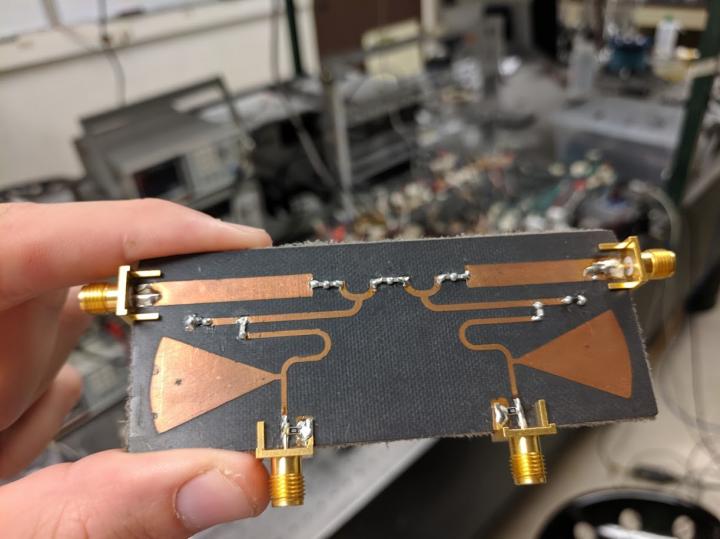 This is a microstrip circuit used to demonstrate Hall Effect for radio waves. Credit: University of Illinois at Urbana-Champaign Department of Mechanical Engineering

However, in a recent paper published in Physical Review Letters, researchers have done exactly this with the help of what they call “synthetic electric and magnetic fields”.

Principal investigator Gaurav Bahl's research group has been working on several methods to improve radio and optical data transmission as well as fiber optic communication. Earlier this year, the group exploited an interaction between light and sound waves to suppress the scattering of light from material defects and published its results in Optica. In 2018, team member

Christopher Peterson was the lead author in a Science Advances paper which explained a technology that promises to halve the bandwidth needed for communications by allowing an antenna to send and receive signals on the same frequency simultaneously through a process called nonreciprocal coupling.

In the current study, Peterson has provided another promising method to directionally control data transmission using a principle similar to the Hall Effect. Instead of an electric current, the team generated a “current of light” by creating synthetic electric and magnetic fields, which affect light the same way the normal fields affect electrons. Unlike conventional electric and magnetic fields, these synthetic fields are created by varying the structure that light propagates through in both space and time.

“Although radio waves not carry charge and therefore do not experience forces from electric or magnetic fields, physicists have known for several years that equivalent forces can be produced by confining light in structures that vary in space or time,” Peterson explained.

By creating a specially designed circuit to enhance the interaction between these synthetic fields and radio waves, the team leveraged the principle of the Hall Effect to boost radio signals going in one direction, increasing their strength, while also stopping and absorbing signals going in the other direction.

Their experiments showed that with the right combination of synthetic fields, signals can be transmitted through the circuit more than 1000-times as effectively in one direction than in the opposite direction. Their research could be used to produce new devices that protect sources of radio waves from potentially harmful interference, or that help ensure sensitive quantum mechanical measurements are accurate.

The team is also working on experiments that extend the concept to other kinds of waves, including light and mechanical vibrations, as they look to establish a new class of devices based on applying the Hall Effect outside of its original domain.