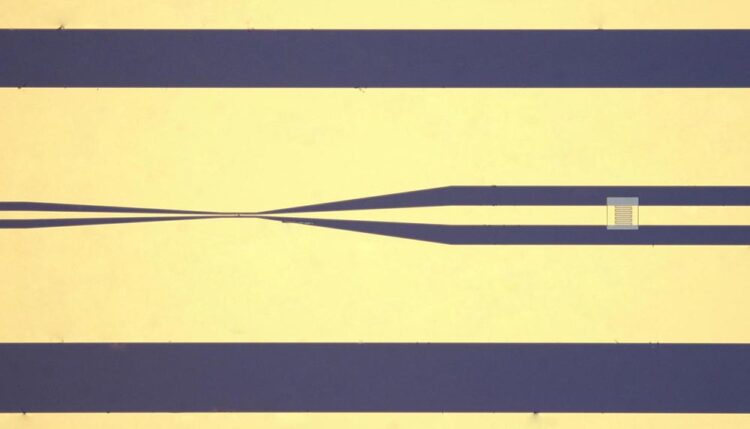 A microscope image of the structures used to initiate the magnetization switching. In the experiment, an optical pump is directed at the photoconductive switch (light grey square), which converts the light into 6-picosecond electric pulses. The structure guides these pulses toward the magnet, which is located in the narrow region between the two grey lines. When the pulses reach the magnet, they trigger the magnetization switching.
Image by K. Jhuria

Advance could lead to new generation of ultrafast computer chips that retain data even when there is no power.

Spintronic devices are attractive alternatives to conventional computer chips, providing digital information storage that is highly energy efficient and also relatively easy to manufacture on a large scale. However, these devices, which rely on magnetic memory, are still hindered by their relatively slow speeds, compared to conventional electronic chips.

In a paper published in the journal Nature Electronics, an international team of researchers has reported a new technique for magnetization switching — the process used to “write” information into magnetic memory — that is nearly 100 times faster than state-of-the-art spintronic devices. The advance could lead to the development of ultrafast magnetic memory for computer chips that would retain data even when there is no power.

In the study, the researchers report using extremely short, 6-picosecond electrical pulses to switch the magnetization of a thin film in a magnetic device with great energy efficiency. A picosecond is one-trillionth of a second.

The research was led by Jon Gorchon, a researcher at the French National Centre for Scientific Research (CNRS) working at the University of Lorraine’s L’Institut Jean Lamour in France, in collaboration with Jeffrey Bokor, professor of electrical engineering and computer sciences at the University of California, Berkeley, and Richard Wilson, assistant professor of mechanical engineering and of materials science and engineering at UC Riverside. The project began at UC Berkeley when Gorchon and Wilson were postdoctoral researchers in Bokor’s lab.

In conventional computer chips, the 0s and 1s of binary data are stored as the “on” or “off” states of individual silicon transistors. In magnetic memory, this same information can be stored as the opposite polarities of magnetization, which are usually thought of as the “up” or “down” states. This magnetic memory is the basis for magnetic hard drive memory, the technology used to store the vast amounts of data in the cloud.

A key feature of magnetic memory is that the data is “non-volatile,” which means that information is retained even when there is no electrical power applied.

“Integrating magnetic memory directly into computer chips has been a long-sought goal,” said Gorchon. “This would allow local data on-chip to be retained when the power is off, and it would enable the information to be accessed far more quickly than pulling it in from a remote disk drive.”

State-of-the-art spin-orbit torque devices developed so far required current pulses of at least a nanosecond, or a millionth of a second, to switch the magnetic bit, while the transistors in state-of-the-art computer chips switch in only 1 to 2 picoseconds. This leads to the speed of the overall circuit being limited by the slow magnetic switching speed.

In this study, the researchers launched the 6-picosecond-wide electrical current pulses along a transmission line into a cobalt-based magnetic bit. The magnetization of the cobalt bit was then demonstrated to be reliably switched by the spin-orbit torque mechanism.

While heating by electric currents is a debilitating problem in most modern devices, the researchers note that, in this experiment, the ultrafast heating aids the magnetization reversal.

“The magnet reacts differently to heating on long versus short time scales,” said Wilson. “When heating is this fast, only a small amount can change the magnetic properties to help reverse the magnet’s direction.”

Indeed, preliminary energy usage estimates are incredibly promising; the energy needed in this “ultrafast” spin-orbit torque device is almost two orders of magnitude smaller than in conventional spintronic devices that operate at much longer time scales.

“The high energy efficiency of this novel, ultrafast magnetic switching process was a big, and very welcome, surprise,” said Bokor. “Such a high-speed, low-energy spintronic device can potentially tackle the performance limitations of current processor level memory systems, and it could also be used for logic applications.”

The experimental methods used by the researchers also offer a new way of triggering and probing spintronic phenomena at ultrafast time scales, which could help better understand the underlying physics at play in phenomena like spin-orbit torque.