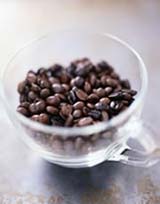 Coffee producers could use the electronic tongue for quality control. <br>© PhotoDisc <br>

A new hand-held electronic tongue promises to give accurate and reliable taste measurements for companies currently relying on human tasters for their quality control of wine, tea, coffee, mineral water and other foods.

Human tasters are still irreplaceable for subtile products such as fine wines and whiskies. But their sense of taste saturates after a while, losing its discriminating edge. The device made by Antonio Riul of EMBRAPA Instrumentação Agropecuária in São Carlos, Brazil, and colleagues rivals human taste buds and never tires1.

The electronic tongue can sense low levels of impurities in water. It can discriminate between Cabernet Sauvignons of the same year from two different wineries, and between those from the same winery but different years. It can also spot molecules such as sugar and salt at concentrations too low for human detection.

The details of this system are still not understood. Each taste sensation may correspond to a fingerprint signal induced by the differential activation of the various taste receptors. The electronic tongue works on this principle.

It contains four different chemical sensors. The sensors comprise very thin films of three polymers and a small molecule containing ruthenium ions. These materials are deposited onto gold electrodes hooked up to an electrical circuit.

In a solution of flavoursome substances such as sugar, salt quinine (bitter) and hydrochloric acid (sour), the thin sensing films absorb the dissolved substances. This alters the electrical behaviour (the capacitance) of the electrodes in a measurable way.

Each sensor responds differently to different tastes. A composite sensor that incorporates all four therefore produces an electronic fingerprint of the taste. The researchers combine these responses into a single data point on a graph. The position on the graph reflects the type of taste: sweet lies towards the top left, for example, sour towards the top right.

Different beverages have a characteristic location on the graph. Coffee is low down around the middle, for instance. Some tastes that might be expected to differ only slightly, such as distilled and mineral water, lie far apart on the graph and so can be clearly distinguished.

The electronic fingerprint allows the team to predict what a particular solution will taste like, says Martin Taylor of the University of Wales at Bangor, who collaborated with the Brazilian team. “It might fit in the salty or sweet domain, for example,” he says. Taylor anticipates that the device will probably be able to discriminate the umami taste too, giving it a refined palate for sushi.