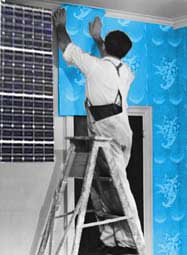 On a roll: solar panels could soon be as cheap and easy to print as wallpaper. <br>© Photodisc / NSU <br>

Solar cells might one day be produced by the roll, as cheaply and easily as wallpaper. Scientists in Arizona are using screen-printing, a technique developed for patterning fabrics, to produce plastic solar cells1.

The technique is another step towards the general availability of solar power from flexible devices on plastic sheets or glass panels. The basic materials of a photovoltaic cell are inexpensive, but combining them into a working device is currently costly. This limits our exploitation of the sun’s potential to provide clean energy.

The organic cells manufactured by Ghassan Jabbour and colleagues at the University of Arizona in Tucson have about a quarter of the efficiency of commercial silicon devices (which turn 10-20 per cent of light energy into electricity). But, being cheap to produce, they can make up in quantity what they lack in quality.

In conventional screen-printing, a taut piece of fabric, patterned by masking some areas with substances such as wax that repel colouring agents, is covered with ink or dye. The screen is then held horizontally over the object to be printed, and a rubber blade is swept across the back, pressing the coloured surface down to produce an image.

Jabbour’s group print very flat, very thin cells onto glass in a similar way. First, they coat the glass with a transparent, electrically conducting material that acts as one of the solar cell’s electrodes. On top of this, they lay down a thin film of a polymer, which helps to gather current from the photovoltaic material.

Finally, they deposit a blend of two organic compounds that convert light into electricity. One, a carbon-based molecule called a fullerene, produces charged particles that carry an electrical current when light shines onto the molecules. The other, a polymer, ferries the current to electrodes on the top and bottom of the cell.

Under blue light, these screen-printed solar cells have an efficiency of 4.3 per cent. They are probably less efficient for white sunlight, so there is work to be done before the devices are good enough for commercial use.

Organic solar cells were first reported last year by Bell Labs in the United States2. hese latest screen-printed cells are based on prototypes made by team member Sean Shaheen and colleagues earlier this year3.

The Ocean Floor under the Microscope