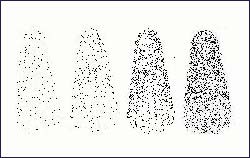 Paradoxical as it seems, a team of University of Southern California researchers has built a signal detector that only works when noise is added.

The device uses a novel kind of transistor made from carbon nanotubes. The principal investigator, Professor Bart Kosko of the USC department of electrical engineering, claims that the series of experiments reported in the December issue of the American Chemical Society’s Nano Letters, says the result is significant both in the development of electronic applications for nanotubes, and in the development of applications for “stochastic resonance,” the counterintuitive use of noise to amplify signals.

The basic idea of stochastic resonance detection, says Kosko, is to create devices with strict threshold effects, that only respond to signals of more than a certain amplitude — and then set this threshold around, or even below the amplitude
of the signal expected.

In the sub threshold form, “In a quiet, noise-free environment,” said the scientist, “the detectors will not receive a signal.” But if a moderate amount of noise is present, the signal will, as it were, float on top of the noise, triggering the detectors.”

Kosko, who earlier published a theorem setting forth the mathematical basis for the phenomenon, says that the experiments made with the novel carbon nanotube detectors reported in the new paper confirm his predictions.

Carbon nanotubes are minute pipes made of graphite, the form of carbon familiar in pencil lead. Carbon atoms in graphite naturally organize themselves into two-dimensional sheets or lattices in a chicken wire or beehive like hexagonal lattice. Modern fabrication techniques can roll up such sheets into ultra thin tubes 100,000 times smaller than a human hair — less than 2 nanometers in diameter.

Twisting such tubes can drastically change their electronic properties, from conductors, to semiconductors. A main focus of interest now is their use in flat panel displays.

The experiment used semiconductor nanotubes two nanometers in diameter and 3,000-5000 nanometers long created by Chongwu Zhou, also of the department of electrical engineering, configured to perform as a simple transistor set to detect an electronic signal.

The signal to be detected, however, was deliberately set well below this critical minimum, so that, in silent conditions, no signal at all was received.

But when the experimenters added noise — random electrical activity — generated by several alternate methods, the signal came through. Too much added noise wiped it out. But at moderate levels previously undetectable signals would come through.

Kosko has earlier created illustrations of the principle. ” Each pixel acts as a separate threshold unit or neuron (or nanotube transistor),” he said.

“We start off by throwing away a great deal of the image’s structure and then add noise from there.”

Kosko has been studying stochastic resonant effects — how noise can in some circumstances bring out otherwise hidden patterns — for years, building on work done for the most part in biology. Researchers have discovered that, for example, random Brownian movement stimulation of the cochlear sensors frog ears increases their sensitivity.

Kosko believes that increased awareness of the stochastic resonance phenomenon can aid designers of communications, including especially modern spread-spectrum devices, which often rely on an array of faint signals.

“Nano-device designers can individually tailors nanotubes to specific signals and then deploy them in numbers — rather like pipe organs tuned to different notes — to take advantage of the SR-effects, ” he said.

###
In addition to Zhou, the paper was also co-authored by USC graduate students Ian Y. Lee and Anile Liu. The National Science Foundation provided funding for the research